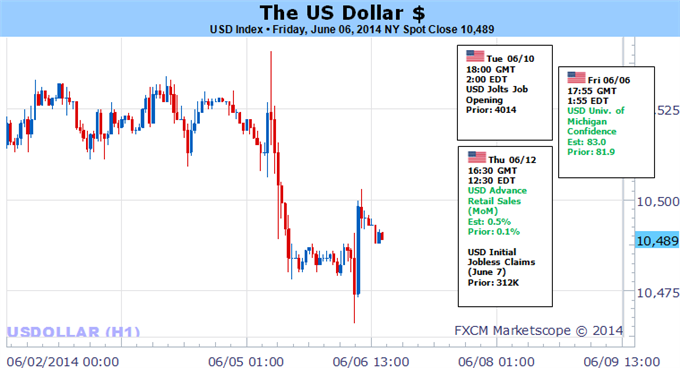 When a currency or asset doesn’t fall in the face of ‘bad’ event risk, it’s bullish. For the greenback, fundamental circumstances and positioning have stacked up against the benchmark currency; and yet it has held steady. Risk trends are soaring, though the safe haven dollar has maintained its buoyancy over both the long and medium-term. Meanwhile, interest rate forecasts have kept a steady course even as yields have retreated. Don’t mistake small corrections as a more expansive bear trend. The dollar looks more like a dormant major simply biding its time for more fertile conditions.

The most prominent fundamental threat to the financial system moving forward is a souring of the extreme run in sentiment. And, that just happens to represent a deep well of untapped potential for the dollar. This past week, the S&P 500 surged to a record high after the ECB upped its stimulus effort and NFPs printed its strongest run of payroll additions in over a decade. In turn, volatility – considered a ‘fear’ measure and the barometer for ‘risk aversion’ – collapsed to a 7-year low in the equity market and a record in FX.

There are few pure optimists remaining in the markets that believe conditions now are ripe for investment for over the medium-to-long term. Most active traders now are looking for quick returns by buying dips and short-term breakouts, selling volatility premium, and employing leverage in riskier assets. Against a backdrop of cooler growth, still-low rates of return and anemic participation; we have already passed the threshold of for deescalating this situation peacefully. The question is not ‘if’ but ‘when will excessive risk by flushed?’

As a safe haven prized when liquidity evaporates and markets grope for safety, the dollar is particularly well positioned for the inevitable. But that theme must be engaged. This is a potential that has long festered, but only nudged modestly a few times over the past years. Yet, our time frame may look a lot more immediate than most suspect. The room for further complacency and leverage is almost at an end with volatility premium near record lows and gearing at record highs. Short-term opportunists are running out of run and time.

Awaiting a spark for risk trends is proving stomach churning for both risk bulls and bears. On the coming week’s docket, there isn’t a particular event that threatens to send market participants into panic – though the tipping point may not need to be so dramatic. Keeping track of the major milestones, the FOMC rate decision on June 18 (with quarterly forecast updates and press conference) is a big ticket item. In the meantime, a careful watch should be kept on the S&P 500 and VIX as barometers for increasingly levered sentiment.

In the meantime, interest rate expectations can prove the more proactive driver. Treasury yields recovered this past week, but they may not be tendering the best assessment for that first FOMC hike. Data and Fed commentary have kept steadfast support of the mid-2015 first hike. This is neither hawkish nor dovish, bearish nor bullish until we put it into perspective. And therein lies the dollar’s strength. While the RBNZ is already hiking and expectations for the BoE have been moved up on the time table (both will be tested this week), the US policy lean is notably more aggressive than its European, Japanese, Chinese and even Australian counterparts. That means more attractive returns over time. – JK