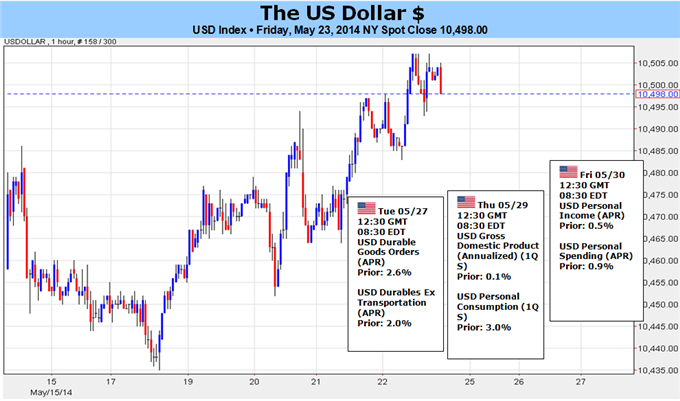 US Dollar On the Verge of Serious Reversal – But Can it Make the Turn?

It was a week of contrasts. Through Friday’s close, the S&P 500 surged to a record high. Yet, at the same time as this ‘risk’ benchmark made its move higher, the traditional safe haven US Dollar strong-armed a bullish reversal. Furthermore, while both benchmark currency and index pushed highs, conviction in participation collapsed. This disparity between performance and positioning draws serious doubt – even amongst the bulls. These are the kinds of circumstances that impose a nauseating calm under heavy tension – where the buildup is slow and eventual reversal seismic. The question for traders is how long can we play musical chairs.

While skepticism casts a long shadow over the markets, the options are to wait for price to reconcile to value or to trade what is in front of us now. Through this past week, the Dow Jones FXCM Dollar Index (ticker = USDollar) and ICE Dollar Index (DXY) broke to six-week highs – though the reversal does not yet have a lot of momentum. Much of the progress seems to be derived from the fading of the greenback’s counterparts rather the strength of its own backdrop.

Amongst the majors, EURUSD is perhaps the most influential of the pairings. The most liquid dollar cross has dropped over 350 pips and is now pressuring its 200-day moving average (a floor for a multi-month bull trend) largely on the change in tack for the ECB. The central bank seems on track for an expansion of its stimulus regime which is a distinct contrast to the Fed’s steady Taper and countdown to a (still distant) rate hike. Meanwhile, moderation of monetary policy expectations on different positions of the monetary policy curve have helped bolster the dollar’s appeal to different degrees versus the British Pound, Australian Dollar, New Zealand Dollar and Japanese Yen.

Valuation in the FX market is relative. So, theoretically, the dollar could still gain with a static fundamental backdrop so long as its major counterparts continued to tumble. The problem is that the stymied conditions will dampen these indirect winds as much as the dollar’s own drivers. That means that further dollar gains will be impeded whether bullish or bearish unless something stirs a dominant theme.

To cater to the dollar’s safe haven sensibilities, a risk aversion move would be an exceptionally effective catalyst. On the docket over the coming week, there is little that stands out as a capable spark. Having weathered an incredibly tepid 1Q GDP, hold to FOMC Taper and various geopolitical flare-ups, the bar is set high. That said, the march to record highs was founded on the lowest equity volume on record and near-record low volatility. That means there is little risk premium for the short-term traders that have been carrying the market over the past three months to exploit. A correction – while not a genuine trend jump off pump – is a strong probability.

Far more active a subject for the dollar is rate speculation. On this front though, the market is stubborn in its suspicions for that first rate hike. Though the Fed has maintained the ‘mid-2015’ banner call for the first increase to the benchmark rate and data has reinforced it, Fed Funds futures still project an opening mover later than that general time frame. If the market were to fully price in a June or July 25 bp hike, the dollar would climb markedly. However, the milestones to solidify that view this week are light. Fed speeches, a PMI activity reading and consumer confidence report are noteworthy, but they lack for the clout that the following week’s May NFPs and labor data will carry. Yet, like the risk current, a rebound in Treasury yields could nevertheless given the dollar some buoyancy. – JK

Market conditions change, and our strategy should reflect those changes. We have coded the DailyFX-Plus strategies for Breakout, Range and Momentum to adapt to these market shifts.