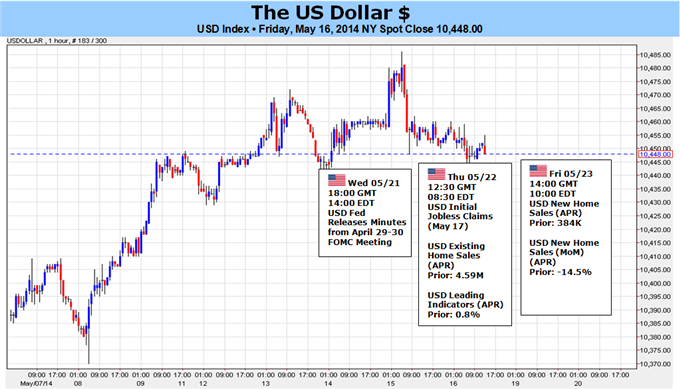 US Dollar Rally Will Stall Without a Spark

The US Dollar managed to turn a close call test of 14-month lows into an impressive rebound over the past two weeks. Yet, without a strong foundation for bulls to drive from, a ‘rebound’ may be all the greenback is able to muster. There are two fundamental themes on which the currency will rely to decide its fate: the bearings for global risk trends and the market’s rate expectations. Either could turn the tides for the benchmark and global capital markets with motivation. However, the potential and probability between the two remain uneven.

Relative monetary policy is currently the most productive fundamental driver behind the dollar – for better or worse. Over the past weeks, we have seen a FOMC rate decision, a number of Fed speeches and round of data that have reinforced the time frame for the central bank’s first rate hike (mid-2015). Despite this, Treasury yields have stumbled. The rate on the favorite 10-year Treasury note dropped to a near seven-month low while the 2-year yield – more sensitive to the beginning of the rate hike regime – has similarly retreated, just not with the same degree of attrition.

Forecasts in Fed Fund futures (derivatives used to gauge central bank moves out into the future) are similarly skeptical of the projected path for rate hikes. Looking out the curve, the first hike is not fully priced in until October of 2015. Yet, as with anything in the FX market, the dollar’s situation is relative. While a late-2015 hike is a weaker than guidance, it would still mark a more hawkish bearing that the Euro (ECB pursuing stimulus), the Yen (BoJ not yet winding down its open-ended QE) and many other counterparts. From this comparative evaluation, we find that European and Asian yields were also in retreat.

Moving forward, the market will intensify its speculation for the Fed’s policy path. There are plenty of scheduled Fed speeches to gauge timing, but data is particularly light in this regards. It is unlikely that the group take a hard turn from their march towards the end of QE3 and the eventual first move to tighten. That means, the market is more likely to feel the tug of a mid-2015 time frame teasing yields and the dollar. More heat may come indirectly from more significant policy swings from the currency’s major counterparts. The ECB push towards June stimulus is a key source of strength for the greenback via EURUSD, so the Eurozone flash PMI readings will carry weight. So too will the UK CPI figures with the pound enjoying a significant rate forecast premium over its US counterpart.

While Fed forecasts will remain an engaged fundamental subject for the dollar, it is important to keep tabs on the other primary driver which may be dormant now but could quickly turn explosive with little warning: risk trends. Complacency continues to grow with exposure to ‘high risk / high yield’ assets extreme, leverage use at records and hedge exposure virtually nonexistent. These are the ingredients of a catastrophe for the financial markets, but masses can remain blissfully ignorant so long as a pullback doesn’t start to incur amplified losses. Yet, with volatility indicators already at natural lows (risk premium fully absorbed), benchmarks like the S&P 500 struggling for meaningful gains, economic activity slowing and interest rates gradually trending higher; it is only a matter of time before this volcano erupts. – JK