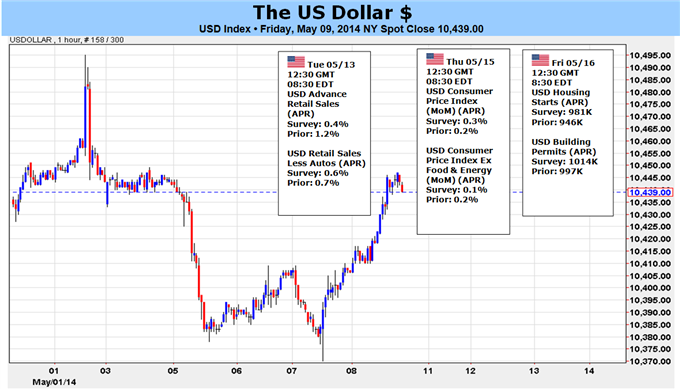 US Dollar Stands to Gain on Rate Forecast, Surge on Risk Trends

Having started out the period with a painful collapse, the US dollar ended this past week with a strong rally that brought it back to even. A substantial level of technical support for the greenback – both with the USDollar Index and individual pairs like EURUSD – was tested and held. Concerns of a deeper bearish current for the dollar have been curbed by a steadfast path in Fed rate expectations, a strong relative pace of growth and even the lingering fears of a capital market unwind. However, these elements have reinforced stability. To put the currency back on a bullish track, we need a motivating driver…or the collapse of its counterparts.

Heading into the new trading week, the most capable and promising driver for the benchmark currency is interest rate speculation. What has been a meaningful driver over the past months, has seen a surprising moderation of its influence just over the last two weeks. A FOMC meeting that reinforced an optimistic (hawkish) outlook despite the shockingly weak 1Q GDP reading and April’s exceptionally strong jobs report leveraged little strength from yields and the dollar.

The recent retreat in 2-year Treasury yields and slip from the 1Y2Y forward swap – good gauges for timing the first rate hike from the Fed – have contributed to the currency’s struggle. Yet, the pullback in yield has followed more a path of moderation than a general reversal in course. If the central bank remains optimistic on growth and plans to end the QE3 program by October (said outright by Dallas Fed President Fisher and insinuated in Chair Yellen’s ‘by fall’ remarks), the path to tightening is not likely to be much further behind. The consensus remains mid-2015 which would put the Fed ahead of the ECB, BoJ, BoC and perhaps even the RBA.

Maintaining optimism over the economic forecast will be key to strengthening the rate outlook, but a hike will only be possible when the specter of inflation arises. And, if the Dollar is to compete against the likes of the Pound or the Australian Dollar, that projection for the first hike and subsequent moves will require a timelier swell in price pressures than the market is currently accounting for. This week’s top US docket theme will be inflation as we take in April readings for import, producer and consumer price gauges. The CPI reading on Thursday will hold particular sway over rate speculation with a forecasted jump in the headline figure to a 2.0 percent annual pace – the Fed’s target.

Another aspect of the ‘relative’ monetary policy influence in the FX market is the bearings and influence of dollar’s counterparts. The EURUSD plunged in the second half of this past week after the ECB threatened a fresh round of accommodation (rate cut or new stimulus), and the greenback reveled in the Euro’s fading yield forecast. The weakness of the dollar’s counterparts could prove even more effective than its own advance. As such, we should keep an eye on the BoE’s Quarterly Inflation Report and the Eurozone 1Q GDP data due this week.

Finally, we should always keep in mind the theme that has struggled for traction but carries the greatest potential should it take: risk trends. Market participants in all asset classes and from bearish to bullish have show increased concern about the value of current market levels (see the weekend Strategy Video on Bubbles here). If fear started to spread, the underlying conditions of record leverage, over-subscription to risky assets and virtually no hedge would set a terrible blaze in financial markets. A quick escalation to deleveraging and panic leads to repatriation and demand for the traditional ‘all-out’ safe havens: dollar and Treasuries. – JK