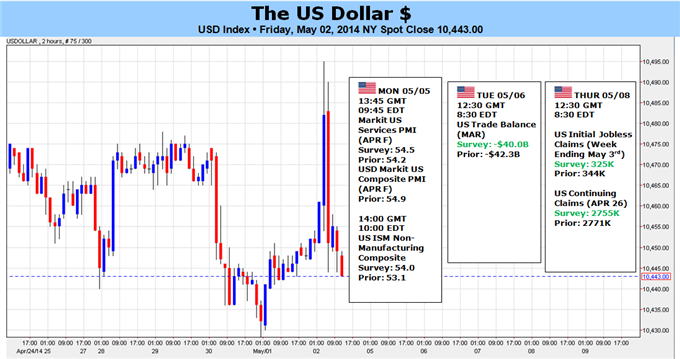 A sharply better-than-expected US Nonfarm Payrolls report wasn’t enough to keep the Dollar from falling versus major FX counterparts, and the Greenback looks at risk of further declines as key fundamental factors favor weakness.

The fact that the Dollar was unable to capitalize on the strong April NFPs data tells us most of what we need to know: a market that doesn’t rally on bullish data probably isn’t bullish. Traders initially sent the Greenback and US Treasury Yields sharply higher as the data showed the national unemployment rate tumbled as the economy added far more jobs than expected. Yet both the currency and interest rates gave back all of those gains, and indeed the downtrend for the US Dollar remained intact.

A quiet week of economic data ahead suggests that the US Dollar’s slow grind lower may continue. The fact that forex market volatility prices trade near record-lows hurts the safe-haven US currency. If traders don’t fear big currency moves, there’s little reason to hold dollars as interest rates remain near record-lows.

The one potentially significant event on the US economic calendar comes on Wednesday as Fed Chair Janet Yellen speaks to Congress on the state of the US economy. It will be important to listen for any shifts in tone following the impressive April labor market data. Of course the recent disappointment in Q1 GDP Growth figures suggests that a more substantive change in policy is relatively unlikely.

Beyond the US calendar, FX traders will keep an eye on upcoming interest rate decisions from the Reserve Bank of Australia, Bank of England, and European Central Bank. Markets predict that none of these central banks will move interest rates in the coming week or even in the coming 12 months. That in itself gives us little reason to expect major currency swings, and much like those central bankers we remain in “wait and see” mode across major pairs.

Until we see a sharp jump in volatility and/or a material shift in interest rate expectations, we see relatively little scope for a Dollar bounce. Our technical and sentiment-based forecasts likewise call for further Greenback weakness. It will likely take a surprising catalyst to break the Greenback out of its slow grind lower. – DR