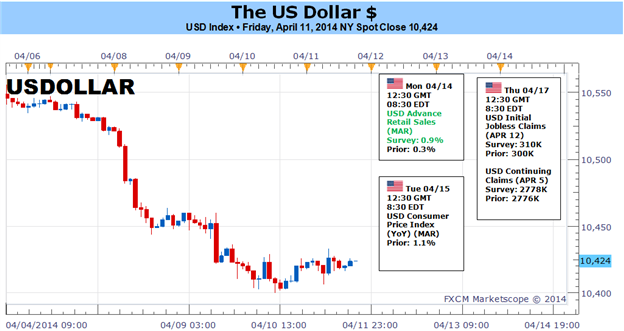 The dollar has suffered. A 1.1 percent tumble through the past week marks the currency’s worst performance since October 18 – notably, when the greenback bottomed out a three-month slide. On the verge of a stark trend change on a individual basis (the Dow Jones FXCM Dollar Index is standing just above a mulit-year trendline and 12-month range low around 10,400) and its important pairings (EURUSD close to 1.4000, GBPUSD at four-year highs and USDJPY looking heavy above 100), the potential for a crippling collapse or dramatic recovery is tangible. Bears will point to the recent slide in Treasury yields and rate expectations as their cue for the next leg. Bulls see the tumble in capital markets last week as the currency’s salvation. What we find is likely something in the middle…and perhaps still bullish.

While FX markets carved hefty moves and tested serious levels, the top financial headline of this past week was the drop in equities. In particular, the S&P 500’s 2.6 percent slide through the period was the benchmark’s worst since the period ending June 1, 2012. In this move, there is the potential for dollar’s salvation – though it isn’t especially high. This benchmark for risk appetite is down 4 percent from the record high set last Friday. For many, such an abrupt move translates into substantial ‘risk aversion’. If there is enough ‘fear’ in this correction such that it infects the broader financial system, the dollar could regain its traction amid a scramble for liquidity.

The difficulty in turning this recent volatility swell into a lever for the dollar is the balance of conviction. To tap the currency’s unique safe haven status, we need the level of speculative unwind that redirects investors from higher yields in the Eurozone, China and the UK to the deep markets and regulations of the US. That is easier said than done. There have been plenty of temporary corrections during the past 5-year dominant bull trend that have petered out and inevitably acted as a spring board for opportunistic speculators. Such consistency has led to an extraordinary sense of complacency and certainty.

Whether we are looking at the bigger picture from a technical view (record high stocks), a fundamental view (high valuations) or structural view (excessive leverage); the potential for a ‘cleansing fire’ is high. The risk that it happens over the coming weeks or months is higher now than it has been in the past years, but it will be particularly difficult to generate the kind of panic that revives the dollar’s safe haven status this week. For one, there are few events that tout the kind of influence necessary to single-handedly redefine sentiment. Perhaps more a burden is that the trading ranks will be severely thinned out by a market holiday for much of the western world on Friday.

It is important to maintain a healthy sense of skepticism for scenarios that are low probability – especially those that we desire for more favorable trading conditions – but it is just as important to have a plan in place should they be realized. If we do manage to see sentiment ignite in flames, the dollar would do more than bounce – it would surge.

A more engaged fundamental theme for FX traders to keep track of this week is the development in interest rate forecasts. The greenback’s tumble these past three months – and particularly the past week – have been heavily influenced by a substantial corrosion in rate forecasts. From a time frame as competitive as early as 1Q 2015, the market is conforming to the mid-2015 by the Fed. This has led to a drop in Treasury yields and market rates – and the dollar in turn. Yet, while the USDollar stands on the cusp of a major trendline break, it is important to differentiate a loss of premium from an actual dovish turn for US forecasts. The latter could sink the greenback, but that is not the circumstances we are working with. The question is how far the premium retreat goes. Does it end this week with March CPI and Fed Chair Yellen speeches or does it continue to weigh? Be ready. – JK