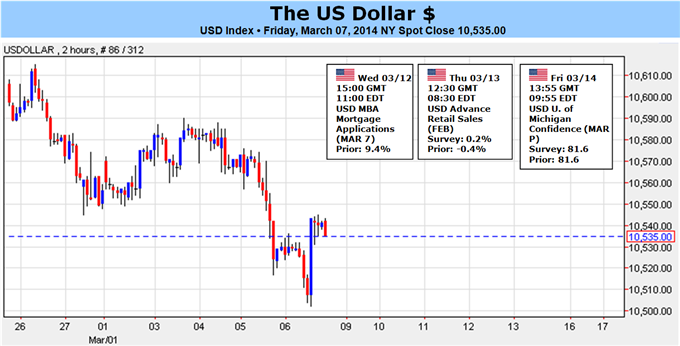 US Dollar Sharply Lower as S&P Surges - What Could Change That?

The US Dollar finished the week sharply lower against major FX counterparts, but a better-than-expected labor market report forced it off of multi-year lows into Friday’s close. What’s next for the Greenback?

A relatively quiet US economic calendar in the days ahead leaves focus on broader financial markets and Dollar drivers. Fresh record-highs in the US S&P 500 hurt demand for the US currency, and we may need to see an important pullback in ‘risk’ for the Dollar to stand a chance at meaningful recovery.

It initially looked as though stocks would take a hit as rising tensions between East and West simmered to a boil in Ukraine over the weekend. An ease in rhetoric nonetheless sparked a dramatic comeback in the S&P and a sharp drop in the US Dollar. Suffice it to say, however, the situation remains fluid and the end game is not clear.

Vested economic and geopolitical interests in Ukraine (from both Russia and the West) should be enough to have cooler heads prevail. It is arguably for that reason that Eastern European troubles have not sparked broader emerging market contagion and financial market distress. Yet we need only remember comparatively minor problems in Argentina sparked significant Emerging Market and Developed Market sell-offs—leading to important US Dollar strength.

A mixed bag for US economic data results otherwise leaves USD forecasts less clear. On the one hand, the world’s largest economy has clearly seen a slowdown in growth through early 2014. On the other, modestly positive labor market trends and other factors suggest that the US remains on firm footing.

The Greenback may continue to benefit from expectations that the US Federal Reserve will continue the so-called “Taper” of its Quantitative Easing policies at its March 19 meeting, but is it enough? US Treasury Yields have fallen considerably from recent peaks, which hurts the USD particularly against the yield-sensitive Japanese Yen. It might take a substantial improvement in US economic results to force a meaningful bounce in domestic yields and interest rate forecasts.

The Dollar remains out of sorts as safe-haven demand seems non-existent, and even the potential for armed conflict in Eastern Europe hasn’t been enough to force a meaningful pullback. Our forex sentiment data warns that the US currency may be at a substantial sentiment extreme versus the Euro, Swiss Franc, and New Zealand Dollar.

Yet sentiment can and has remained extreme for longer than any trader can remain solvent. We’re watching for Dollar weakness at these levels, but it may take relatively little to force a significant pullback in “risk” and a similarly important Dollar bounce.