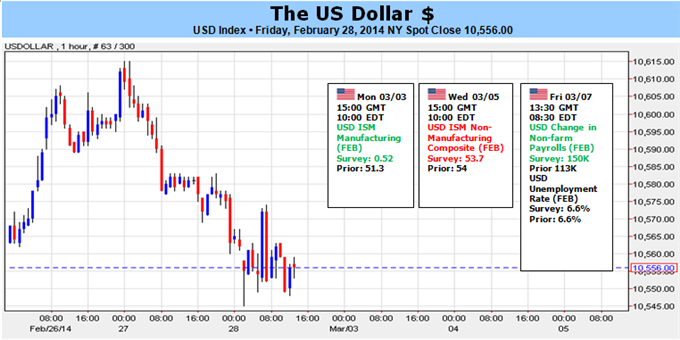 The dollar’s recovery effort fell apart this past week as a record push for the S&P 500 spawned ‘risk appetite’ headlines and the market’s Taper interests continued to fade. In turn, the EURUSD stands just below a multi-year resistance around 1.3800/3850 and the Dow Jones FXCM Dollar Index (ticker = USDollar) looks ready to collapse into another bear leg. No doubt, the imminent presence of key levels for the greenback puts it in immediate jeopardy of an unfavorable bolt of volatility. But, just as with the US equity indexes’ regular fits, there is a cavernous gap between a technical break and a committed trend.

It is important for the week ahead, that we first steel ourselves against the excitement of technical breaks and the headlines they will no doubt inspire. For the greenback itself, the USDollar Index is testing the support it has relied upon since its September 2012 reversal. The situation looks more severe / enticing for some of the major pairings. AUDUSD and NZDUSD are dangerously close to range resistance levels at 0.9080 and 0.8400 respectively. Far more extraordinary though is GBPUSD’s proximity to four-year highs above 1.6800 and the ceiling of a EURUSD wedge that has developed for the better part of the euro’s existence at 1.3800.

Under current market conditions, it isn’t difficult to trip technical barriers. A lack of conviction and momentum leads to market mechanics that set off automated orders set around key levels or draw volatility-starved speculators in for short-term drives. Yet, a breakout that doesn’t draw in greater participation to feed the move is ultimately destined to stall. Converting the disparate faithful already in the market is proving almost as difficult as luring new participants in. This is no doubt a sign of disillusionment with the potential for further traditional gains on already richly priced markets that have been inflated by a yield chase. That leads to lop-sided opportunity.

Given the S&P 500’s move to end February above the 2014 range high at 1,850, the most pressing theme to pick up on this coming week is ‘risk trends’. Yet, despite the speculative appetites the benchmark index represents, we have long ago witnessed the market’s hesitance to use the index as its banner. Stock benchmarks from other financial centers have fallen short of its highs. Yen crosses this past week were well off their own multi-year highs – failing even to find progress on near-term technical patterns. Even high yield and leveraged assets are far off pace.

The preconditions for a dedicated wave of fresh capital inflow are exceptionally high. The outlook for economic growth, yields and global financial disruptions clash with markets at record highs on the back of record leverage. Investors are overexposed as it is. Maintaining that exposure until long-term circumstances improve – that would take a considerable amount of time – is the best that can be achieved. And, it is also a fragile balance to maintain. The same circumstances that have delivered us to our current state expose us to rapid and destructive unwinding as little margin is left to cover losses. If such a situation were realized, the dollar would stand to benefit handsomely.

Despite the vulnerability to ‘risk aversion’ once it sets in, the spark to first shake complacency is proving difficult to combust. Unrest in the Ukraine, recognition of the recession of stimulus, a reversal in the dearth of risk premium, even NFPs can generate volatility. But it is that jump to the self-generating vicious cycle of deleveraging that is key. Meanwhile, monetary policy interests may elicit some movement on the dollar’s behalf. Friday’s February NFPs figures are the big-ticket item, but we should also take note of the Senate confirmation hearing for nominees Stanley Fischer, Lael Brainard and Jerome Powell. Their view can help shape policy through the rest of the Taper and into the eventual rate hike regime. Yet, the market has yet to be seriously distressed by the withdrawal of stimulus. There will be a tipping point, however. When the assumption that risk is shifting away from central bank balance sheets to individual investors, the ‘moral hazard’ premium will collapse. And, Dallas Fed Fisher is already laying the ground work by saying the Taper would continue even if capital markets were to suffer a ‘significant correction’. – JK