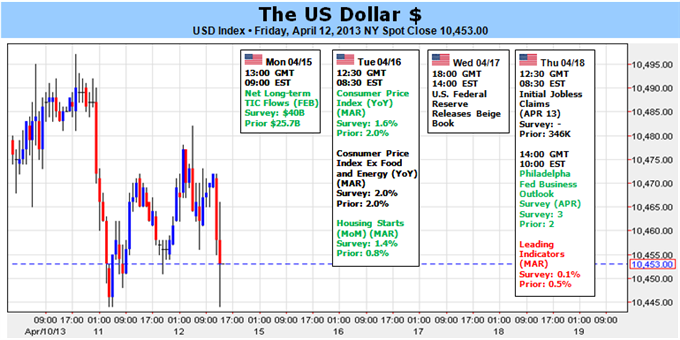 The US Dollar was the second worst performing major this past week, gaining only against the significantly weaker Japanese Yen by +0.81%. Gains against the US Dollar were prevalent in the commodity currency and the Euro just like the first week of April, with the year’s top performer, the New Zealand Dollar, leading the way, up by +1.86%. Overall, the US Dollar’s weakness can be attributed to the combination of soft key data and dovish comments from Federal Reserve Chairman Ben Bernanke, which together pointed to the same conclusion: the Fed’s easing program is likely to remain in place throughout 2013.

Chairman Bernanke’s comments during a speech on April 8 run directly against the tone struck at the most recent FOMC reading, as displayed in the Minutes which were released on Wednesday. The Minutes stated: “In light of the current review of benefits and costs, one member judged that the pace of purchases should ideally be slowed immediately. A few members felt that the risks and costs of purchases, along with the improved outlook since last fall, would likely make a reduction in the pace of purchases appropriate around midyear, with purchases ending later this year. Several others thought that if the outlook for labor market conditions improved as anticipated, it would probably be appropriate to slow purchases later in the year and to stop them by year-end. Two members indicated that purchases might well continue at the current pace at least through the end of the year.” This is particularly key, because it means that, despite a growing consensus that easing could cease later in the year, it means that Chairman Bernanke is run directly against the direction a growing number of other policymakers are.

The chairman, however, may have economic data on his side, as recent economic data in the United States has turned lower. Over the past two weeks, the following major data releases have misses consensus forecasts: ISM Manufacturing (MAR), ADP Employment (MAR), ISM Services (MAR), Nonfarm Payrolls (MAR), Advance Retail Sales (MAR), and U. of Michigan Confidence (APR P). This weak data, which really started in mid-March, has contributed to major downside pressure on US Treasury yields – this undermines the interest earned on US Dollar-denominated assets, which decreases the buck’s appeal.

With this soft backdrop present – Chairman Bernanke’s bias overrides that of the aggregate FOMC – the week ahead will likely be that of further weakness for the US Dollar. The US Treasury’s semiannual report on foreign exchange stressed that Japan must be cautious in its easing agenda, a clear sign that fiscal authorities are starting to worry about the magnitude and pace of the USDJPY’s appreciation the past several months. Accordingly, this offers another reason to be bearish for the week ahead. A potential bullish catalyst? The Cypriot crisis is rearising, now that it’s clear that the country needs €6B more than expected – a revival of risk-aversion is necessary for substantial US Dollar strength for the next five days. –CV

Want the forecasts to appear right on your charts? Download the DailyFX News App.