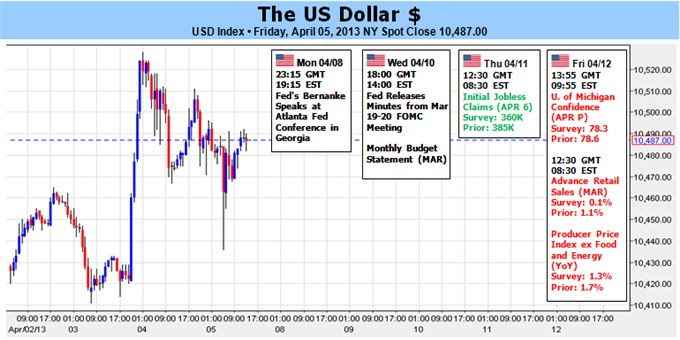 The dollar’s performance this past week was something of a mixed bag given the heavy fundamental crosswinds from other central bank decisions. Moving forward, however, the fundamental focus is likely to turn squarely back onto the future of the Fed’s QE3 withdrawal time frame and subsequently primal risk trends. And, those happen to be the dollar’s primary two fundamental catalysts. The question we should ask is whether there are enough sparks along the way to build and sustain speculative momentum.

While there is considerable, direct fundamental fodder to consider in the coming week and beyond; we should first take a moment to appreciate the most active driver through the past week. In the FX market – where value is relative – the strength and weakness of counter currencies should carry as much weight as the base currency. However, when the principal currency is the dollar – the world’s most liquid legal tender – the relationship is skewed. It is difficult for a counterpart to override the greenback’s dominance – with perhaps the regular exception of general risk appetite trends. That control was tested this past week though when the focus turned to central bank stimulus from the Fed’s largest counterparts.

Since the financial crisis back in late 2008, the Federal Reserve has led the charge with stimulus to both stabilize markets and recharge growth. And, with the active $85 billion-per-month QE3 purchase program; that dominance was further ensured…until now. This past week, under the leadership of new Governor Kuroda, the Bank of Japan moved to compete with the Fed on the stimulus field (essentially the engagement in currency wars). While the ¥7 trillion (approximately $75 billion) per month programis smaller than the US effort, the relative size to GDP, market size and balance sheet size is of greater scale. Beyond simply offsetting the negative dollar implications of more US stimulus, the Japanese effort actually outpaces the Fed’s – especially as this is a new effort.

On a less grandiose scale – but just as important as it presents a complete picture of counterbalancing Fed stimulus – we have also seen serious speculation for further European Central Bank (ECB) and Band of England (BoE) stimulus develop over the past few weeks. Expectations for the BoE to play catch up to the Fed’s open-ended program may have gotten away from speculators, but replacement Governor Carney will likely usher in an expansion when he comes on board in July. The ECB, on the other hand, was good for shock value and scale comparison. With the group reportedly discussing possible rate cuts, new bank liquidity programs and small business lending schemes; investors may reverse their view of the shrinking ECB balance sheet and rising Euro-area returns.

The greater the global stimulus effort is compared to the US effort, the better it is for the dollar. Yet, the most loaded scenario to leverage the dollar’s strength would be one where the end of the Fed’s own quantitative easing program can be seen. We may be closer to that point than the masses appreciate. Over the past few weeks, various central bank officials have voiced their belief that the Treasury and MBS purchase program could be brought to an end before the end of the year. With Chairman Bernanke speaking about an exit discussion ‘soon’, James Bullard saying the need for flexibility was realized and Esther George commenting that the Fed is ‘over-accommodative’; we can perceive a shift in temperament. Yet, are also seeing explicit calls – even from known doves. San Francisco Fed President John Williams said that if his forecasts for labor improvement hold, he could see a tapering of QE3 by the summer.

It is important to remember with the Fed’s stimulus efforts that the market impact will come well before the discussion of rate hikes is had - or even before the balance sheet is reversed. The stimulus build up over the years has played a critical role is leading capital markets (led by the S&P 500) higher as investors assumed the Fed was absorbing all risk and offering a heavy handed investor to frontrun. Speculators will cut out well before the Fed’s buying even levels off as investors respond to the risk aversion implications well before the question of competitive currency devaluation is even considered. Speaking of risk trends, 1Q earnings season starts with Alcoa on Monday. – JK