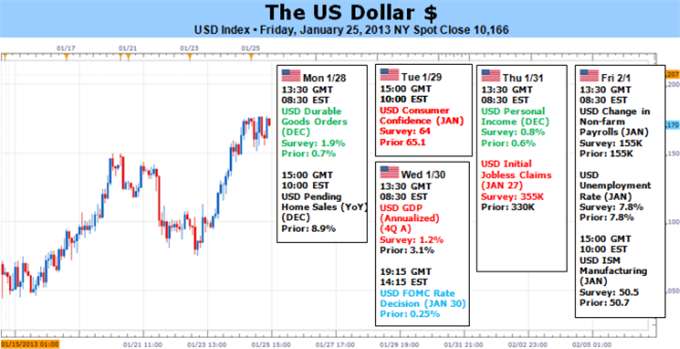 Forex: Dollar - Either Greenback or EUR/USD Rally Must Surrender

Dollar: Either Greenback or EUR/USD Rally Must Surrender

There was an unusual contrast this past week where the EURUSD advanced to its highest weekly close in 11 months at the same time that the Dow Jones FXCM Dollar Index (ticker = USDollar) ended the period at a 6-month high. A positive correlation between the world’s most liquid currency and most heavily traded pair is extraordinary. And, ‘extraordinary’ doesn’t last in the markets. Therefore, one of the critical questions facing FX traders is whether the dollar’s individual strength or the EURUSD’s striking rally will break first.

Before wading into time frame and catalysts for the inevitable reconciliation, we should first understand how the positive correlation between EURUSD and the USDollar Index developed and why it is usual. EURUSD is the most heavily traded currency pair in the Forex market and naturally the euro is the dollar’s primary counterpart. Therefore, its advance speaks to a serious depreciation of the greenback. However, the USDollar Index is an equally-weighted measure of EURUSD, GBPUSD, AUDUSD and USDJPY. The blend is partially meant to expose the dollar’s various roles (safe haven, funding currency, financial appeal, etc). So, between these two, we see that the dollar is itself strong, but the euro happens to be just strong enough to outpace the reserve when set side-by-side.

There are a few ways that this aberration is resolved. The most dramatic conciliation would be through a sudden shift in risk appetite trends. To this point, there seems to be rather solid evidence that investor optimism is humming. The benchmark S&P 500 US equity index advanced to a five-year high (by running an 8-day rally which itself is unseen since 2004) this past week. Meanwhile, the carry trade favorite yen crosses have surged to multi-year highs of their own. And all of this has occurred as volatility indexes (measures of ‘fear’) slid down to five-year lows of their own.

Yet, in that assessment of strength, there are a number of unusual counterpoints. While equities have moved to new highs, participation – measured by volume – this past week was the lowest (excluding holiday periods) in over a decade. Carry trade interest outside of the yen crosses (such as AUDUSD) has proven remarkably lax. And, the balance between market-based yields and risk speaks suggest investors have to take a speculative leap to put their capital to work. Partly, this contrast exists because the influence of standard ‘risk appetite’ has eased – allowing other factors (like competitive stimulus efforts) take over. Yet, should conviction return to the balance of greed and fear, those correlations will snap back into place.

We have a number of catalysts in the week ahead that we can look to for tangible influence over the dollar and broader investment trends. At the top of the list is the Federal Open Market Committee’s (FOMC) rate decision. The US central bank announced its plans for cumulative $85 billion-per-month purchases of Treasuries and mortgage backed securities (MBS) – cementing the US as the most pervasive and active stimulators in a market of easing. That said, we have heard from the group that the effort could be tapered or ended well before the end of the year. After the report of significantly LTRO repayments in the Eurozone (a reduction in stimulus), the market will be watching. More stimulus supports risk taking while simultaneously increasing the US money supply – a double blow for the dollar.

The Fed’s policy bearing carries further repercussion as the market becomes more fully mindful of competitive easing (also termed ‘Currency Wars’) even if officials say this is not the objective. If the Fed takes a status quo approach, we may have to defer to other catalysts. The 4Q US GDP figure will be a big ticket item. The IMF downgrade not only US growth forecasts this past week, but those for much of the developed world as well. A significant miss here could bring an otherwise conveniently, overlooked problem to the forefront. January nonfarm payrolls (NFPs) carry a similar weight. As one of the key targets for policy moving forward (the Fed is targeting a 6.5 percent jobless rate), employment data can carry stir stimulus and thereby risk expectations on a substantive surprise. – JK