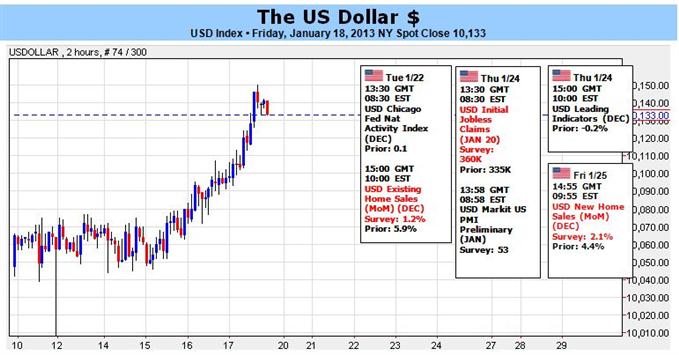 Dollar Advance Despite Risk Hinting at a Stronger Bull Trend?

- Dollar benefits from euro, yen’s drop; but will fiscal issues take over?

The S&P 500 managed to push to fresh, five-year highs and the yen crosses soared to multi-year highs of their own this past week. Under most circumstances, the highs for these two different ‘risk sensitive’ benchmarks would signal to us that risk appetite trends were in high gear. However, if that were the case, why was the US Dollar – the world’s reserve currency – trading at a five-month high? In fact, the Dow Jones FXCM Dollar Index (ticker = USDollar) had also posted its biggest weekly rally this past week in six months as well. Is the dollar no longer beholden to its safe haven status, or is investor sentiment not as strong as the other benchmark suggest?

In fundamentals, there are a few ‘themes’ that will take precedence over a currency’s – or entire market’s – performance. These influences do change with time, but one aspect for the dollar, every currency and every investable asset that will not change is the balance between the risk and reward in any trade taken. That being said, the dollar may see its position as the ultimate safe haven flex should it start to show particularly risky tendencies or start to play the role of a high-yield currency. Though the short-term benchmark US Libor and Treasury rates are actually at a premium to European and Japanese counterparts, it won’t play the role of investment currency any time soon.

More interesting though may be a change in the risk profile the currency currently holds. Into the turn of the year, the world was tuned into the last-minute Fiscal Cliff debates that threatened to pitch the US (and world?) into a renewed recession and win the country an unceremonious sovereign credit rating downgrade. When that risk was ‘resolved’, we witnessed both the dollar and equities advance. Stocks rose as the threat of slower economic activity and earnings dissipated and offered a relief rally. At the same time, the greenback advanced – despite its safe haven status – because the risk of a downgrade diminished.

After the US government announced its solution to the automatic spending cuts and tax hikes at the start of the year, it was clear that the situation was not resolved however, and the same issues would be revisited not too long into the future. According to the Treasury, the country will run out of money in staying below the debt ceiling by mid-February to March. Also, on March 1st the so called sequester automatic spending cuts can go into effect if a resolution isn’t found and the Federal budget is due by March 27. There are plenty of hurdles for the US heading forward, and the risk hangs heavy. So, perhaps there was a ‘relief rally’ into the end of the week when House members suggested a possible three-month extension on the debt limit – offering the same relief as with the Fiscal Cliff. Yet, that hardly defuses the larger concerns, and it certainly isn’t as definitive a solution as with the 11th hour save on January 2.

Given the lack of respite in this impending risk, we have to assume that the disparity between the dollar and other benchmarks is a lack of genuine sentiment that naturally drives riskier assets higher and the dollar lower. Though we are seeing US equity benchmarks at highs, we know that stimulus and flush banks have a considerable hand in keeping them elevated. For the yen crosses, the strength is inversely a weakness of Japanese yen (not an unrestrained appetite for carry). For a more candid measure of sentiment, we can look at the Risk-Reward Index; which has dropped precipitously (10.4 percent) to a four month low.

Looking to this measure of underlying speculative health, we recognize the very different view of risk trends. If the Risk-Reward Index continues its tumble, the theme it represents will eventually draw the broader market with it – ultimately pushing the dollar even higher. This can happen do to a natural correction (though we could wait a long time for that), a building fear of larger issues (like the debt issues and growth impact of austerity) or a specific catalyst. There aren’t systemic catalysts on deck next week, so remain vigilant. - JK