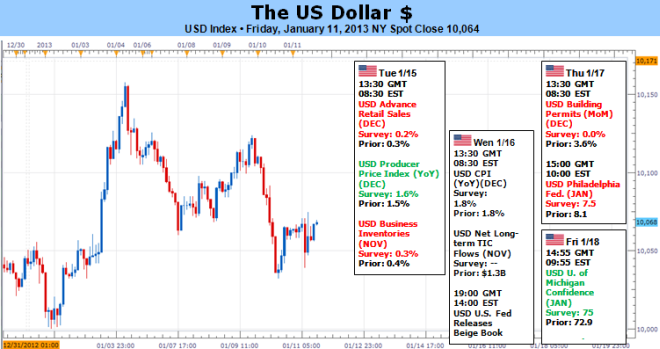 Dollar Suffers Critical Breaks but Risk Trends May Salvage It

After three consecutive weeks of advance, the Dow Jones FXCM Dollar Index (ticker = USDollar) finally closed on a bearish footing through this past Friday. That said, technical traders will recognize that we have yet to see a lower low; and that amongst the crosses, only the EURUSD managed serious anti-dollar progress. From a fundamental perspective, the backdrop for a self-sustaining bear trend is even more suspect as the dollar’s greatest foe – risk appetite – has not fully engaged.

The US dollar is first and foremost the world’s reserve currency. In that role, it best performs when fear overrides the appetite for yield (which the greenback lacks for) and the flight to safety imbues the benchmark with an almost divine-status. That is where most of the concern of a dollar selloff arose this past week. The headlines were crowded by reports of the S&P 500 closing at five-year highs, EURUSD rallying sharply above 1.3300 and the yen crosses reviving multi-week drives. Often times, when these otherwise very different assets advance it is founded on the same general appetite for yield. In other words, they are brought together by a common swell of risk appetite.

However, that appeal for higher return at the expense of greater exposure to known (but delayed) risk was as robust as many might think. Purely from market performance alone, we note that majors (dollar-based pairs) with the greatest carry – AUDUSD and NZDUSD – both retreated into the end of the week. Also, the US equity benchmark may have closed at a multi-month high, but it was previously just below the record and barely moved beyond the threshold. From a fundamental perspective, there has been little from within the US market or broader global financial system that supports risk taking.

The ‘resolution’ to the Fiscal cliff on the opening week of the year represented a ‘relief’ event – where an impending threat was removed. However it wasn’t remedied, only delayed. The Deficit Ceiling issue will be revisited and used as a bargaining chip over the coming weeks and months (the Treasury will lose wiggle room to cover the gap by mid-February and automatic spending cuts come into place by March 1). The same temporary reprieve was applied to the Euro-area crisis, emerging market speculative capital flows and global growth troubles. Events that offer relief are good for short-term capital inflow, but lasting trends requires the opportunity of higher return and/or lower risk profiles. We have disarmed many of the imminent threats; and the encouraging mix of growth, return and risk-buffer is lacking.

What does this mean for the markets and dollar specifically? Much of the ‘easy’ climb in risk appetite and weight on the dollar has been spent. The risk measures (the equities-based VIX and currency-based FX VIX indexes are at five-year lows) are fully deleveraged. Yields rise with underlying growth which takes considerable time. As such, the day-to-day and week-to-week developments will carry more weight. Over the upcoming week, there are a few big-ticket notables. The 4Q US earnings season will hold a prominent spot. The flow picks up starting the second half of the week with JPMorgan, Goldman Sachs, Bank of New York, Bank of America and Citibank (the bulk of the financial system) are scheduled to report. And, the markets are become more skeptical of EPS numbers that try to offset falling margins. The Chinese 4Q GDP figures on Friday will give a proxy read on global economic health (though its representation will be clouded by questions of reliability).

In the end, ‘good’ outcomes from upcoming event risk will carry less weight as short-term improvement has been priced in and medium-term concerns remain. That would work to the dollar’s safe haven advantage (something we have already seen as the USDollar has advanced since November while equities have done the same). Alternatively, if there is a lasting onset of steady risk appetite recovery, the dollar may still not be in a bad situation. US markets rates are higher than European and its capital levels are more than competitive. – JK