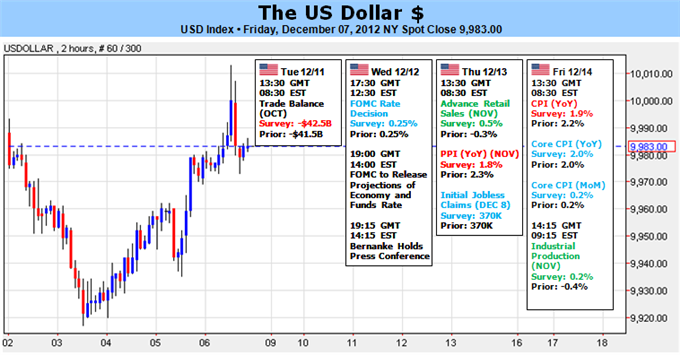 Forex Analysis: Dollar Will Struggle to Climb with Fed, Fiscal Cliff Ahead

The dollar’s performance this past week – like the broader capital and FX markets – was uneven. Nevertheless, the first three-day rally from the Dow Jones FXCM Dollar Index (ticker = USDollar) in three weeks and an impressive reversal from the benchmark EURUSD have called traders attention for what could happen over the coming week. In the scheduled and unscheduled event risk over the coming trading week, we see the fundamental heft that could activate underlying trends. The Federal Reserve’s final monetary policy decision of the year, key milestones on the Euro-area crisis and the ongoing discussions over the Fiscal Cliff are the type of items that can tap elemental considerations like risk appetite trends. The impact from these fundamental highlights alone looks good for a breakout, but what about the year-end liquidity drain? And how do we reconcile the likely outcomes of these events with the heavy technical levels in view?

There are three facets of the market to consider moving forward, and all three point to a very different outcome for sentiment and the greenback. First, there is the technicalaspect. Looking to the charts, positioning and volume for various markets; we see a common resistance in ‘risk’ and particular exhaustion in exposure. Of particular interest are the impressive rallies in US, European and Asian equity indexes into their respective trendlines and Fibonacci retracements. On the FX side, we find high risk-profile pairs like AUDUSD and NZDJPY anchored to the top of multi-year wedge patterns. Pair that with declining volume and over-saturation in risk holdings (COT figures show net long futures interest in the Aussie dollar hit a record high this past week), and it seems we are ripe for reversal.

However, every technical barrier can also be an opportunity for triggering a breakout. Fundamentals will certainly play a critical part in deciding our bearings and whether we can unite enough of the market behind the same cause and force a breakout or lasting trend. As it happens, the aforementioned three major events carry a probable outcome that doesn’t support the safe haven dollar. Most immediate – chronologically and psychologically – is the Fed decision. This gathering is already unique in that it comes with quarterly updated forecasts and Chairman Bernanke press conference. What makes it truly special though is the likelihood of ‘new’ stimulus being introduced.

This month, the central bank’s extension of the Operation Twist program (selling short-term Treasuries and using the proceeds to buy longer dated maturities) will expire. From a balance sheet perspective, the ending of this program would count a modest tightening effort. As such, the leading consensus in the market is that the group will replace the expiration of this $45 billion-per-month program with a comparable, new initiative. The composition of the replacement program is where the market reaction lies. An ‘unsterilized’ buying of Treasury, MBS (mortgage-backed securities) or agency debt is expected for the same size as the previous effort. That is sizable, but then again, it is theoretically priced in. Furthermore, the introduction to the QE3 program back in September essentially marked a top in risk.

The other two headline events carry similar consensus and doubts over influence. For the Eurozone’s vote on paying Greece the next round of aid, the buyback program seems to be on course and the alternative would be disastrous for everyone. It would hardly surprise euro traders – much less risk trends – to see it confirmed. As for the Fiscal Cliff, the timing is still up in the air for when and whether it will be resolved. Yet, US politicians are unlikely to let automatic cuts and tax hikes trigger. This won’t likely see progress until the following week.

So, even though we have influential fundamental events on the horizon and they are seen as most likely ending with a positive bearing on risk trends, a forward-looking market has likely undermined the impact. That not only curbs an unfavorable (for the dollar) risk-on trend, it also dampens the potential for a serious breakout and move in either direction. Heavy trading is what we need, though, if we have any hope at jump starting a trend. Speculative interest is at its lowest level since 1997 (according to S&P 500 futures open interest) and there is a natural drain into year end. While we may have volatility this week, we shouldn’t bank on structural trends. - JK