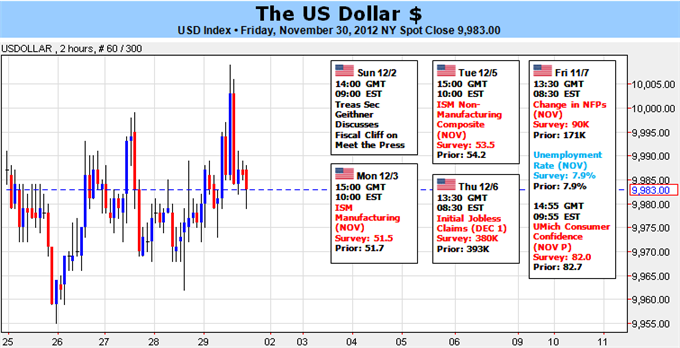 Just a cursory look at the US Dollar chart and we can feel the pressure building. On an activity basis, the benchmark currency index (ticker = USDollar) is carving out its smallest range (using a two-week ATR reading) in years. In contrast, the fundamental risks are lining up with the Fiscal Cliff rhetoric escalating and Euro-area crisis resolution skepticism reaching new heights.

The ingredients are there for a serious breakout, but there is a critical catalyst that must make an appearance first: volatility. Normally, we would look at the economic docket or event risk that can stir the bigger fundamental themes. However, this time around, our focus must turn to a far more elemental aspect of market activity. Without it, the dollar will remain stationary, risk trends will flounder and volatility will continue to deflate to fresh five year lows.

The elusive factor for tipping speculative appetite and driving a clear trend is participation (‘volume’ or ‘open interest’ in trader parlance). If market depth thins out, there are fewer investors available to drive a move that sees a buildup in risk assets or feed a steady risk aversion move. On one hand, it is difficult to attract bids to buy at higher highs (pushing a bullish trend higher). On the other, if there isn’t a significant pool of uncommitted traders (ready to unwind their exposure under relatively mundane losses); a deleveraging initiative will just as quickly run out of steam.

For traders, a strong historical correlation between volume, volatility (the VIX Index) and risk trends marks a clear causation chain. For the US dollar to catch traction, we need to leverage its reserve and safe haven value. In other words, we need to see a risk aversion wave sweep over the market. A plunge in sentiment generally leads market participants to buy up ‘insurance’ in the form of derivatives – as it is sometimes unfeasible to simply liquidate. That insurance cost is reflected in our traditional volatility measures (most often backed out of options prices as the only unknown variable). That is why we the VIX and FX VIX indexes are considered ‘fear’ indexes. From there, the more exposure there is and higher (volume) the market levels, the more insurance is needed.

Incorporating the tepid participation factor into the equation, the five-year lows in the Forex volatility and stubbornly buoyant S&P 500 (and other risk benchmarks) makes more sense. It also presents a major hurdle to pulling overextended markets back to more reasonable levels to entice sidelined capital back in to the market.

Heading into the end of the year, the stability of the dollar and broader markets will grow even more tense than what we have seen in previous months under these distortions. Historically, speculative participation evaporates until the middle of January as market holidays and year-end accounting typically sideline investors. On the other hand, the fundamental risks to global economy and financial markets continue to multiple.

Top risk for sentiment (and oddly enough, boon for the US dollar) moving forward is that the US is forced over the ‘Fiscal Cliff’. A combination of automatic tax increases and spending cuts in the absence of a palatable budget deal by the end of the year, this $600 billion gouge to US GDP would tip the largest economy into research and pull rest of the world down with it. Though this may infer downgrade risk to the United States’ credit rating, even a step down won’t supplant its reserve standing in the near future. Unfortunately, there are few clear dates and times for meetings on this topic. Even more problematic, the market has grown suspiciously unresponsive to clear signs that both sides of the debate are moving further away from compromise. Other threats to keep tabs on are the ongoing Euro-area crisis (far from solved, despite what officials say) and a packed economic docket. The Fed decision next week is particularly big. - JK