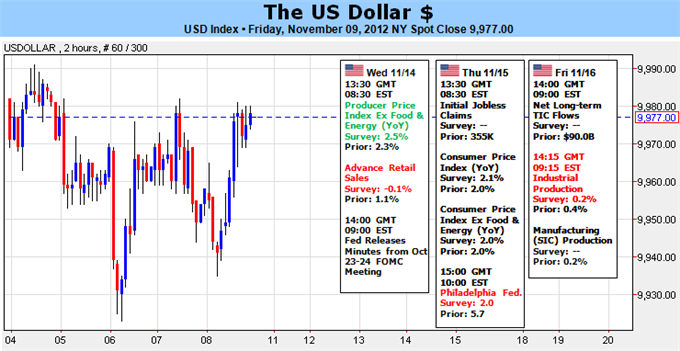 Even the most optimistic investor has to be nervous about the state of risk appetite. This past week, the benchmark US equity indexes (Dow Jones Industrial Average and S&P 500) broke critical levels of support and plunged to three-month lows. That is a considerable warning that a bigger speculative deleveraging effort is under way. The shift from this particular market is particularly remarkable. Not only are equities the average investor’s ‘risky’ or growth-sensitive asset, but the Federal Reserve has further backstopped the market through stimulus. In other words, a turn here speaks to the kind of concern that not even a central bank guarantee can prevent. Under this kind of pressure, we would expect the Forex market’s preferred safe haven currency (the US dollar) to surge. So why hasn’t it taken off yet?

Looking back at the greenback’s performance this past week, we see that progress has been uneven at best. The benchmark EURUSD has slipped to two-month lows below 1.2750 and GBPUSD has followed suit. That said, the far more risk-sensitive AUDUSD and NZDUSD have refused to definitively reverse their respective bull trends – an odd thing for carry pairs that should be exceptionally sensitive to sentiment trends. Furthermore, pulling back from the ebb and flow of risk, USDJPY has retreated sharply even though the yen faces immediate fundamental troubles with its fiscal health. Ultimately, it is the Dow Jones FXCM Dollar Index (ticker = USDollar) that best illustrates the reticence of the world’s reserve currency. Congestion has been tamed by the 100-day moving average and pulsating 10,000 figure above.

Over the past months, we have seen a few disconnects between benchmark measures – though they haven’t been quite as flagrant. In most of those cases, the grounds for the divergence were a lack of conviction. Risk aversion (or risk appetite) wasn’t fully established, so either one asset was moving because it was extremely sensitive to sentiment or there was otherwise a completely different fundamental driver in play. There is an element of disbelief to this move as well. While there is plenty of fundamental fuel to raze sentiment to the ground (slowing growth, a downturn in earnings growth, Euro-area debt crisis, Asian financial troubles, US fiscal crisis, etc), we need the spark from the speculative ranks to ensure the spark catches.

While hesitation is certainly an aspect, deleveraging is starting to give an active face to otherwise intangible fundamental worry. The moves we are starting to see should have leveraged more of a response from the dollar. Something else was acting against this straightforward speculative reaction – a buffer. That extra facet is the primary source of the fear that has developed - the ‘Fiscal Cliff’. This is a media-derived term that refers to a sudden expiration of tax cuts and implementation of spending cuts – activated at the end of the year if the US government cannot find a solution to rein the budget in.

The $600 billion impact the cliff entails would easily drive the US economy to recession and carry serious ramifications for the global markets that are already on shaky footing. Normally, this would be a significant booster for the dollar. Why? Though the US would be the point of origin, the backdraft would be a global event that sent investors the world over seeking safety in the most liquid and trustworthy assets – ironically enough, the dollar and Treasuries. Yet, not this time. There is another element to this explosive mix. If the fiscal cliff scenario plays out, it would likely lead to a US downgrade. That would lower (marginally, but substantive) the dollar’s safe haven status.

As we must often do as speculators, tracking out the path from here runs on the most probable outcomes and expectations as to how speculators will respond. It is highly unlikely that the US plummets over the fiscal cliff – though even if it did, the backlash of the diminished safe haven status would be short-lived and the dollar would rally back eventually. The more contentious scenario is that the budgetary issue is solved and the market expects it. As the most prolific threat to stability, the absence of this risk could lead to a rebound in risk and dollar tumble. There are other issues however. The dollar needs fiscal cliff uncertainty and broad risk aversion. - JK