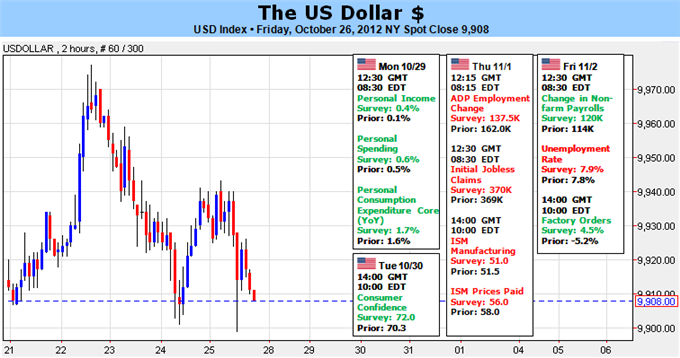 FOREX: Dollar Positioned for Rally Back to 1.2800 if Stimulus Held

Over the past three weeks, the Dow Jones FXCM Dollar Index (ticker = USDollar) has made absolutely no progress. This isn’t to suggest that the backdrop for the greenback and Forex market is dead. Quite the contrary. Activity levels have picked up substantially. However, there is little consistency to this elevated turnover. A pick up in volatility without a singular bearing is a perfect reflection of the fundamentals that are confusing and aggravating traders. Alternatively, these same set of circumstances represent an ideal situation for meaningful breakouts. The pressure is building and the masses are starting to take fundamental shortfalls more seriously, while hope for continuous external support (stimulus) fades. The scales will soon tip, but what will set an underlying shift in sentiment into motion?

The first connection many fundamental traders make with the dollar is that the currency’s primary role is as the favored safe haven from disruptive volatility and general fear. As the world’s most prolific reserve currency and given the sanctity of Treasuries as ‘risk free’ assets is hardcoded into money managers minds, the dollar will absolutely rally as fear builds. Yet, the intensity of risk appetite / risk aversion matters when it comes to setting the currency onto a clear trend. In the event of a panic where liquidity or structural aspects of the financial market are cast into doubt, instincts of preservation kick in and the dollar rallies aggressively.

Confidence has certainly deteriorated with various aspects of the US and global economies and markets taking a turn for the worse. However, we have always fallen short of panic-levels or have seen burgeoning threats answers with stimulus efforts. That said, we are quickly coming to end of the stimulus rope after both the Fed and ECB introduced open-ended bond purchase programs. Now, what is the proverbial straw that breaks the camel’s back. Though it is tidy and reassuring to assign a specific, known event risk as the potential catalyst; it is far more likely that sentiment collapses under its own weight.

Nevertheless, there is plenty of event risk through the end of the year that can ignite the markets. Through the coming week, there are plenty of US indicators to obsess over; but few of these have the influence to generate notable volatility – much less incite our next trends. The fundamental litmus test for dollar catalysts is whether the data/event can stir change global sentiment. On the regular economic calendar, consumer confidence, manufacturing activity and personal spending reports can all offer minor adjustments to the world’s largest economy. Yet, the only standard indicator torrid enough to tap risk appetite is October NFPs. For those still expecting the payroll report to carry the kind of weight it did five years ago – it is a growth proxy coming a week after 3Q US GDP and a monetary policy factor following a view from the Fed that suggests they will wait until the end of the year when Operation Twist expires before making further changes.

It is important to look beyond the standard data and look at those issues important enough to alter the confidence of investors world-wide. The fiscal cliff is one of those high-level concerns and the primary reason short-term speculators should watch the US elections. G20 meetings, larger debt sales, regime change in China and a similar fiscal cliff in Japan are all prominent threats over the coming months; but those are don’t the immediate pressure that would settle volatility to trend next week.

The most urgent and overwhelming risk to the system now is the Euro-area crisis. Spain has seen its budget stretched to the limits and its banking system sputter, but it has yet to ask for a rescue. Greece is desperately trying to win further support but its creditors have drawn a heavy line. Status quo on either can seize the broader markets and set EURUSD into motion for a run to and below 1.2825. On the other hand, they are amongst the few remaining ‘relief points’. Winning the next step on either case would do little for long-term strength, but it could provide the kind of short-term euphoria that drives EURUSD above 1.3100 and US equity indexes temporarily to fresh four-year highs. – JK