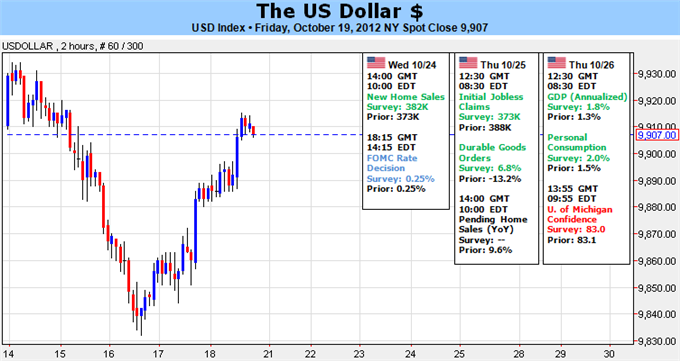 Currency traders’ perpetual obsession with the trajectory of monetary policy would imply the Federal Reserve monetary policy announcement ought to be the center of attention in the week ahead. The outing is unlikely to be as market-moving as one might suspect however. Indeed, coming on the heels of a reboot of quantitative easing just last month, it seems unlikely that Ben Bernanke and company are geared to deliver anything significant besides a restatement of the new status quo. Indeed, policymakers are almost certainly in wait-and-see mode for some time from here as they assess the effects of the new MBS purchase effort.

With that in mind, a busy calendar of US economic is likely to take on a broader significance for financial markets, with investors interpreting data flow in terms of its implications for larger risk sentiment trends. Despite a still disappointing pace of recovery, the US remains a pocket of relative of strength compared with the other major engines of global output as the slowdown in China turns increasingly overt while the recession in the Eurozone shows no meaningful signs of improvement. That means next week’s ample supply of US growth indicators is likely to be judged in terms of the ability of the North American powerhouse to offset sluggish performance elsewhere.

Not surprisingly, third-quarter US GDP figures take top billing. Expectations call an increase of 1.8 percent, marking acceleration from the 1.3 percent recorded in the three months through June. Meanwhile, October’s manufacturing activity surveys from the Richmond and Kansas City branches of the Federal Reserve are likewise forecast to show improvement, hinting the positive momentum shining through in September data carried over into the following month. This bodes well for risk appetite, which somewhat counter-intuitively threatens to weigh on the US Dollar against most of its major counterparts (with the notable exception of the Yen) as support from haven-seeking capital flows unravels.

Besides economic data, incoming third-quarter corporate earnings reports stand as the other critical catalyst shaping market sentiment, and thereby the trajectory of the greenback. Guidance from cycle-sensitive names like Caterpillar is likely to be interpreted long the same lines as US economic data releases, helping to shape the degree to which North America can power worldwide performance given malaise elsewhere. The main event is likely to be found elsewhere however as all eyes turn to the results from Apple. The tech behemoth is in focus not only because of its sheer size relative to the overall equities space but also in light of last week’s volatility-driving disappointments from two prominent titans of the tech space, Google and Microsoft. This casts a cloud over what would otherwise promise to be a healthy week for risk appetite, hinting the US Dollar may yet find a lifeline amid returning market jitters. -IS