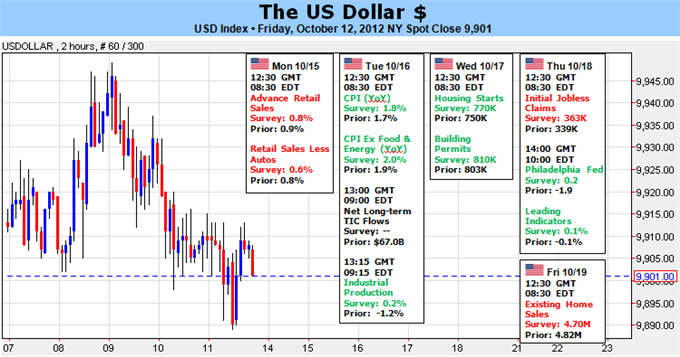 US Dollar in its Longest Rally Since June, Moment of Truth this Week

Though it may have lacked for momentum, the US dollar nevertheless has carved out its strongest run in four months through this past week. With Friday’s close, the Dow Jones FXCM Dollar Index (ticker = USDollar) managed a positive close on the week. Bigger picture, that is the fourth consecutive weekly advance from the greenback, which is its longest bullish run since the opening week of June – where the currency peaked at two-year highs just above 10,300.

You don’t have to be an expert technical trader to recognize the world’s reserve currency now finds itself at a critical juncture. For the Dollar Index, 9950 represents the upper bounds of a descending channel that has guided the currency down from its June 1 peak. Across the majors, we similar resistance points for the greenback. EURUSD stands just above its 200-day moving average at 1.2825, AUDUSD is weighing well-worn resistance at 1.0150 and USDJPY is eyeing its 100-day moving average again at 79.00. Nearly every one of the majors is on the cusp of a sizable move in the dollar’s favor. That isn’t a coincidence.

We know that the dollar is an ideal safe haven currency, global rates of return are extremely low on a historical basis (lowering the threshold of appeal for higher-yielding currencies) and the market’s appreciation of general risk is at an extreme low (in fact the FX volatility index is at a five-year low 7.7 percent). This is a dangerous balance that has been prolonged far longer than fundamentals would justify by stimulus hopes and inert investor approach. That is where the tension on risk trends comes in.

Once again, borrowing from the technical side of things, we find the US equity benchmarks (excellent measures of sentiment backstopped by stimulus hope) on the verge of serious reversals. Should the S&P 500 break below 1425 and the Dow Jones Industrial Average slide below 13,300, it would stand as a signal to investors everywhere that the Fed’s safety net is not enough to keep riskier assets on the rise. And, since higher yields and a new wave of capital from sidelined funds (the ICI reported the biggest outflow of capital from equity mutual funds in 14 months and 17 straight months of withdrawal for domestic equities through September) relies on a strong economy; that leaves a surge in risk as the outlet for rebalancing. And so the safe haven dollar waits.

Before we assume a reversal is a sure thing, it is important to appreciate that the discrepancy between current market levels and fundamental risks has been an issue for months. The masses have tolerated the disparity because there hasn’t been a catalyst that ignites a panic to force an unwinding. However, in these conditions, it is increasingly difficult to initiate and sustain a rebound in ‘risk appetite’. Alternatively, bulls’ faith is highly combustible. That makes each wade into heavy event risk a considerable opportunity for the dollar.

The fundamental heat was raised this past week between policy meetings discussing Europe’s troubles and the start of the 3Q US earnings session. But, this week’s offerings are far more influential. Corporate health will be an immediate consideration with Citi reporting Monday, Goldman Sachs and Intel on Tuesday, and Bank of America on Wednesday. Earnings have been one of the few bright spots in an otherwise stormy economy; so any weakness will be noticed.

Later in the week, we will meet event risk that is more binary in nature (easier to discern risk on or risk off). The third quarter GDP season – a definitive measure of fundamental health on an economy level – will start with China’s report Thursday morning. The US prints the following week, but the world’s second largest economy carries enough sway to alter the course of sentiment on its own. Then there is the two-day EU Summit on Thursday and Friday. This is an opportunity for policy officials to offer some relief from crisis fears with concessions to Greece and Spain. However, if markets are already unsteady; a missed opportunity could drive risk selloff and dollar rally. – JK