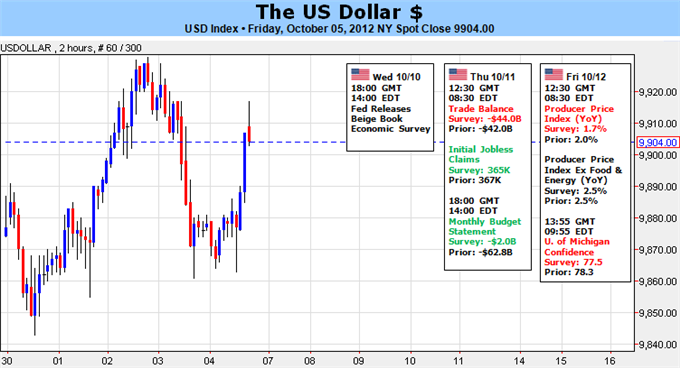 The US Dollar had a mediocre week, depreciating by -1.44% against the Euro while appreciating by +1.84% against the beleaguered Australian Dollar. While there were a number of important data releases this week, including the September ISM Manufacturing, Services, and Prices Paid readings, the far and away most important new development for the US Dollar was…what came out of Europe, not the better than expected September labor market reading released on Friday. Based on the forthcoming observations, we must give the US Dollar a neutral rating for the coming week, skewed towards a weaker performance.

Before we talk about Europe, it’s best to review the September NFPs that were released on Friday. The official print was +114K, a hair below the +115K forecasted, and the prior two months were revised up by +40K to +45K or so each. Needless to say, those are significant improvements to the July and August prints. In the context of the August print, which originally came in at +96K but was revised to +142K, it’s necessary to question whether or not the Federal Reserve would have announced QE3 the ensuing week, had +142K been the first print; I say yes.

Although today’s employment report had some glaring bright spots (have to like the increase in labor participation and the drop in the Unemployment Rate), the conditions present are not enough, by the Fed’s definition, to warrant a withdrawal of stimulus. There’s been chatter that the Fed is talking about defining what the “brakes” will be, and the proposal from Charles Evans, the Chicago Fed President, is being floated as the likely frontrunner. “The Evans Rule,” as it has been dubbed, states that QE3 – the open-ended agency mortgage-backed securities (MBS) purchase program – will remain in place until the Unemployment Rate drops to 7% or Core CPI jumps to 3% on a yearly-basis; neither of those are close to being fulfilled.

While that logic alone tempers our optimism for the US Dollar following the strong jobs report, it is the Spanish bailout waiting in the wings represents a very powerful positive fundamental catalyst. What we know is this: the Spanish 2013 budget has been well-received thus far despite some light criticism; the European Stability Mechanism (ESM) comes online on Monday, October 8; and there have been rumors that Germany has told Spain to wait for the green light before officially announcing a bailout request. Once Spain accepts an international bailout and taps the ESM – which the ECB is essentially leveraging – the ECB will come into the market and use its shiny new Outright Monetary Transactions (OMTs) to suppress Spanish bond yields; as I’ve previously discussed, lower Spanish yields are bullish for the Euro while higher Spanish yields are bearish for the Euro. When this happens, the investment horizon will be immensely clearer, which reduces the appeal of the US Dollar – and it is possible with the ESM coming online this week that a bailout request is around the corner.

In terms of data due during the next week, the flow is significantly lighter than it was this past one. On Thursday, the August Trade Balance deficit is expected to have widened to -$44.0B from -$42.0B. Although the US Dollar was weaker in August, slowed global growth likely reduced demand for US exports, which imports easily outperformed. Also on Thursday Initial Jobless Claims for the week of October 6, and another lower print would further solidify the short-term US labor market picture in a positive light. Finally on Friday, the September Producer Price Index will be released and show no signs of an inflation threat (for now), while the preliminary October U. of Michigan Confidence report should show a slight erosion. Given our medium-term fundamental outlook coming into focus now – more positive developments out of Europe – and a weak data outlook, we have to drop our US Dollar outlook to neutral. –CV