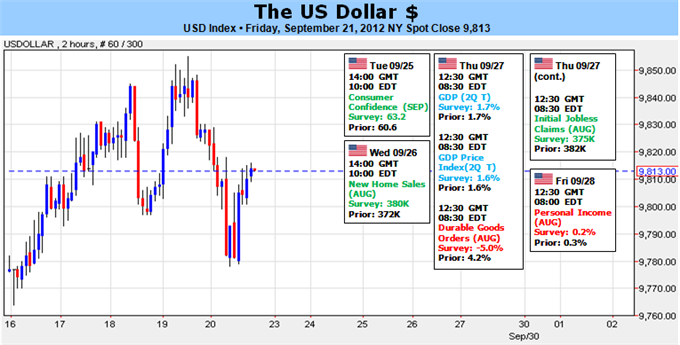 Correction or reversal? That is the question we have to ask of the dollar’s performance this past week. With the close on Friday, the Dow Jones FXCM Dollar Index (ticker = USDollar) managed to close out its first bullish week in five. Yet, the turn didn’t even recover half of the losses that the benchmark suffered the previous week – a period driven by the aftermath of the ECB’s stimulus plans and the hefty contribution of the Fed’s QE3 program. The mixture of risk appetite and proactive devaluation in US stimulus efforts is a potent cocktail for greenback selling. Yet, how long can sentiment hold out on the merits of these latest rounds of support? Is it truly the cumulative influence of previous rounds of external support that keeps risk up and the dollar down or is it the hope for more in the future?

The answer to this question is vital to the next, serious leg for the broader capital markets and the dollar. If it is indeed the appetite / promise of more stimulus in the future that keeps drawing speculators into the market, we may be at a critical point in the multi-year bull phase that has shepherded capital flows since the subprime-fueled crisis.

The near-coordinated stimulus wave by the BoE (Funds for Lending), ECB (Outright Monetary Transactions), Fed (Quantitative Easing round 3) and BoJ (10 trillion yen increase in its asset purchase program) this past month was persuasive enough to finally drive US equities through congestion to multi-year highs and leverage EURUSD above 1.3000. Yet, the week that followed the crescendo to this swell – the Fed’s QE3 – was one of consolidation and mild retracement. After the considerable buildup in expectations into the round of central bank meetings and flood of endorphins from historical highs, bulls would expect this to carry a lasting trend (week to months) similar to previous big-ticket programs. However, the lack of immediate follow through is a concern.

If risk trends cannot ride out optimism on this latest addition, investors may begin to recognize that future iterations from the largest central banks will likely be smaller in size and scope. Both the Fed and ECB’s programs are open-ended endeavors. The US central bank will supposedly make monthly purchases of MBS until employment improves while the European authority could theoretically buy unlimited government debt of troubled member countries until their yields are within reasonable levels. It would be extraordinarily difficult for central banks to outdo these programs. Furthermore, such an effort would be dangerously close to blatantly providing support for capital markets rather than the stated goal of supporting economic recovery and financial stability. If this is the case, perhaps we are coming to the end of stimulus-supported capital market trends.

What would a market without faith in a stimulus safety net look like? From the fundamental backdrop, rates of return are extremely low – and pushed even lower when central banks buy government and MBS debt. An aggregate of the 10-year government bond yields for the majors shows the level of return is at recent historical lows. One of the few things keeping markets a buoyant as they are is the equally extreme lows in volatility (considered a measure of ‘fear’). The FX volatility index is at 2007 lows. If stimulus is unable to maintain volatility at its extremes, the balance of Risk-Reward could correct violently.

The other, complicating factor in this scenario is participation. The advance we’ve seen in capital markets these past years has developed on significantly reduced participation (whether you look at mutual fund flows, volume, open interest or other measures). There is a belief that the sidelined money can start to trickle back into the market at current levels and keep us moving higher – but that would assume that investors would be willing to join at exceptional highs where rates of return are extremely anemic and the outlook for growth looks poor. Alternatively, a thinned market would amplify an unwinding by those that have been lured by the persistent market performance. How this bigger theme plays out is critical for the dollar. With a surge in volatility and plunge in risk, the safe haven dollar looks ideal. – JK