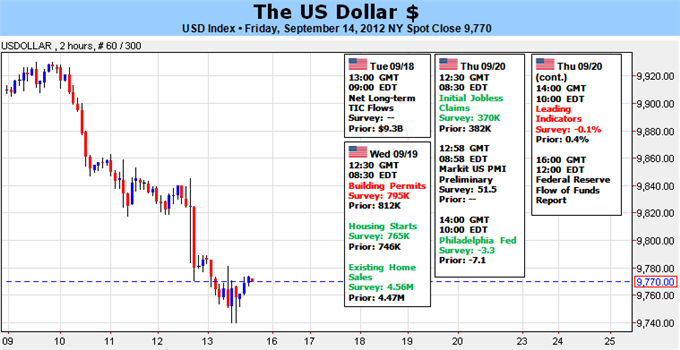 US Fed Dooms Dollar to Further Declines as Dow Surges

Promises of open-ended quantitative easing from the US Federal Reserve doomed the US Dollar (ticker: USDOLLAR) to its single-largest weekly decline of the year, and it will likely take a significant shift in market sentiment for any real chance of a dollar reversal.

Traders feared major US Dollar volatility on the highly-anticipated US Federal Open Market Committee rate decision, and the FOMC lived up to expectations as its announcement of indefinite Quantitative Easing (QE) was enough to knock out the Greenback. The Euro surged against the downtrodden US currency, and there seems to be little in the way of further declines. Yet the EURUSD now stands a remarkable 1000+ pips above its July lows, and the natural question becomes, “Is now a good time to sell the EURUSD?”

The week ahead offers significantly less event risk and potentially lowers volatility than we’ve seen through September. But traders should keep an eye on a number of Fed speeches as the FOMC’s groundbreaking announcement on QE leaves markets especially sensitive to surprises.

Many economists expected that the Fed would announce fresh Quantitative Easing worth $500 billion, but the actual announcement left most puzzled as officials committed to an open-ended $40 billion of Mortgage-Backed Securities (MBS) purchases per month. It was somewhat amusing to read reactions to the decision—some said the Fed had done too little and others claimed it was far too much. But ultimately the FOMC said it would continue with regular bond purchases until the labor market improves, and we could theoretically see bond buying well in-excess of the $500B expected.

In his post-event news conference, Fed Chairman Ben Bernanke was very vague on what improvement in the labor market would warrant an end to money printing. This essentially leaves predictions for the future of QE dependent on every single economic data print tangentially linked to the labor market through the foreseeable future. Expect fireworks on any significant surprises in US Nonfarm Payrolls data from now until central bankers end the current wave of QE.

A noteworthy wave of Fed speeches in the week ahead likewise warrants special attention, as traders will be especially attuned to any hints on the future of Fed policy. Else expect the US Dollar and broader major currencies to track moves in the Dow Jones Industrial Average, US Treasury markets, and any developments in the ongoing European debt crisis.

A material improvement in European financial market conditions hurt outlook for the safe-haven USD, and continued calm could push the Greenback to fresh lows across the board. The European Central Bank pledged unlimited bond purchases for at-risk Euro sovereigns (with some conditions attached), and the Spanish government saw its borrowing costs plunge on the announcements. Spain and the broader region aren’t out of trouble just yet, but hyperactive central banks on both sides of the Atlantic have calmed market fears and eliminated some tail-risk.

It will likely take a significant shift in financial market conditions for the US Dollar to see an important bounce. Exceedingly low FX market and US S&P 500 volatility expectations underline the complacency surrounding capital markets. As long as investors don’t fear a market breakdown, we might expect the safe-haven US currency to continue lower against the Euro and other major counterparts. – DR