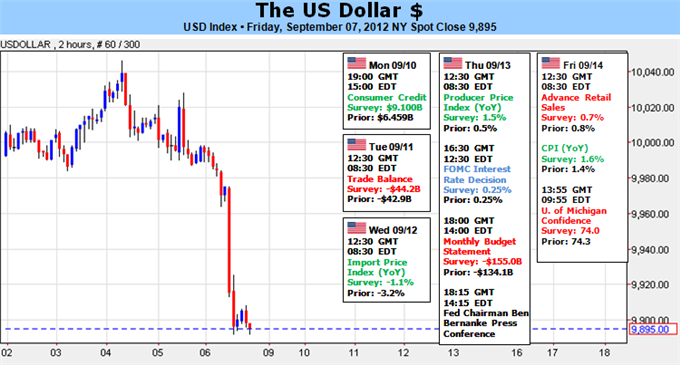 The dollar was dealt a hefty blow this past week. The Dow Jones FXCM Dollar Index (ticker = USDollar) dove into four-month lows Friday with its biggest single-day decline in 10 weeks. From a chart of the USDollar or EURUSD, it seems as if the dollar has had the floor ripped out from underneath it. However, selling momentum is not guaranteed. In fact, it will be more difficult to sustain than many may suspect. Whether or not EURUSD overtakes 1.3000 and AUDUSD surmounts 1.0600 is a matter for the Federal Reserve to decide.

To gain a sense of the dollar’s orientation over the coming week, we need to assess what fundamental themes are in control and what will provoke their development moving forward. Without doubt, the greenback’s greatest adversary moving forward is the Fed rate decision scheduled Thursday (16:30 GMT). Yet, why is the policy meeting so influential to the currency? Because of its direct impact on the currency’s value (via money supply and yields) and the sway over risk appetite trends (the greenback is the market’s preferred safe haven currency).

Market-wide investor sentiment (risk trends) carries the greatest sway over the dollar and broader capital markets. That is where the bulk of the benchmark’s losses were founded this past week. Though most would point to Friday’s August NFP figures as the most influential event for this past trading cycle, the ECB rate decision was arguably the bigger coup. The European policy authority decided to satisfy speculative demands / hope for more support to end the Euro-area’s two-and-a-half year debt crisis. In a new, unlimited bond purchase program (Outright Monetary Transactions – OMT), the greatest single threat to global financial stability has been put on ice.

Yet, lessening the pressure on the world’s largest collective economy doesn’t naturally translate into a return to growth and competitive rates. Therefore, the progress made was likely more of a relief rally than a genuine trend shift. The prospect for a serious rally moving forward requires a renewed buying interest for carry currencies and equities (at or near multi-year highs). That responsibility falls to the Fed. Similar to the buildup in expectations for the ECB to satisfy traders’ expectations with the OMT program, the capital markets have shown a serious swell in speculation for a fresh stimulus program from the Fed.

Establishing to what degree the market is pricing in QE3 or an equivalent program by the central bank is important to gauging the reaction. If the consensus were for nothing to happen at the meeting and the Fed stayed put, there would be little reaction. Alternatively, if the masses were expecting a large-scale asset purchase (LSAP) program and nothing was offered, the market would react with a sharp selling of risky assets (Aussie dollar, Euro, US equities, etc) and sizable rally for the dollar.

With the dollar’s abrupt drop through the end of this past week (as well as the buoyancy in gold and Treasuries), it is clear that the market expects more external buying from the world’s largest central bank. Expectations were certainly amplified by the disappointing headline NFP reading, which rose by ‘only’ 96,000 jobs. Yet, looking at the S&P 500’s four-year high, gold’s surge above 1700 and the dollar’s sharp tumble to multi-month lows; there is a sense that the market is expecting too much from the Fed – both in terms of scope and influence of further support schemes.

Setting the scene, in the lead up to the event; the masses will throttle back in adding into exposure ahead of announcement – that will translate into a tamed trend, but it could also amplify volatility. There are three components to the event: the policy decision (16:30 GMT), the release of the fundamental forecasts (18:00 GMT) and Chairman Bernanke’s press conference (18:15 GMT). Any new program would likely come from the decision itself, so that is make-or-break. And, anything short of a blatant QE3-like program could be construed as a ‘disappointment’. Meeting expectations is difficult enough given current levels. Beating them could be near impossible. – JK