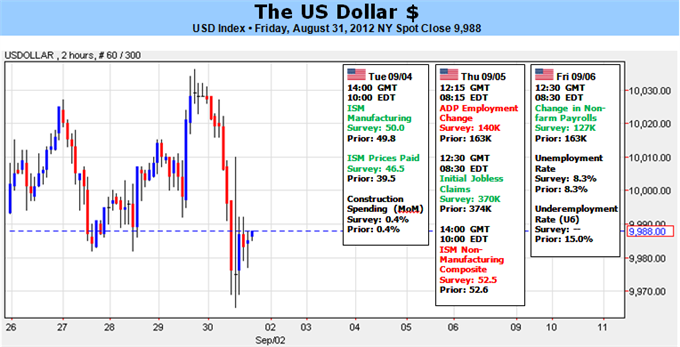 The US Dollar had a mediocre week, depreciating modestly against most of the majors save the Australian and New Zealand Dollars, to which it gained +0.79% and +1.01%, respectively. The top performers this week against the world’s reserve currency were the Canadian Dollar and the Japanese Yen, with the USDCAD depreciating by -0.59% and the USDJPY depreciating by -0.46%. Largely speaking, the majority of the US Dollar’s losses came on Friday, following Federal Reserve Chairman Ben Bernanke’s speech on the history and effectiveness of monetary policy at the Jackson Hole Economic Policy Symposium. And given the framework that the world’s most powerful central banker laid out, we must adorn the US Dollar with an outlook of neutral in the coming days.

Chairman Bernanke’s speech was not one to be read over quickly: although it was mostly a reflection on monetary policy since the onset of the global financial crisis in 2007, it did reveal Chairman Bernanke’s beliefs about nontraditional policy instruments (large-scale asset purchases (LSAPs) or maturity extension programs (MEP)). The argument set forth was sufficient enough to “conclude that nontraditional policy tools have been and can continue to be effective in providing financial accommodation,” but Chairman Bernanke continued that “[policymakers] are less certain about the magnitudes and persistence of those effects than we are about those of more-traditional policies.”

There are two takeaways here: first, that the Federal Reserve believes that nontraditional tools (large-scale asset purchases a la quantitative easing rounds one and two, and the maturity extension program dubbed ‘Operation Twist’) can be effective, as history has showed; and two, that there is belief that the current and previous nontraditional programs deployed could have diminishing returns.

Delving deeper into the second point, Chairman Bernanke noted that “one possible cost of conducting additional LSAPs is that these operations could impair the functioning of securities markets…a second potential cost of additional securities purchases is that substantial further expansions of the balance sheet could reduce public confidence in the Fed’s ability to exit smoothly from its accommodative policies at the appropriate time.”

Overall, the Federal Reserve chairman concluded that “it seems clear…that such [nontraditional] policies can be effective…taking due account of the uncertainties and limits of its policy tools, the Federal Reserve will provide additional policy accommodation as needed to promote a strong economic recovery and sustained improvement in labor market conditions in a context of price stability.” Thus, the Federal Reserve is primed to act, willing to act, but is not sure that what has been used in the past will be as effective going forward. As such, any new forms of easing, in our opinion, are likely to be cut from a different cloth than LSAPs or MEPs, likely aimed at helping consumers and home owners more directly. Employment readings will be crucial going forward, given the emphasis that Chairman Bernanke placed on the struggling labor market.

While there are several important data releases due this week (ISM Manufacturing and Prices Paid on Tuesday, ADP Employment Change and Initial Claims on Thursday), barring significant misses on the other data due, only the August Nonfarm Payrolls report on Friday really matters. The Unemployment Rate is forecasted to remain at 8.3%, according to a Bloomberg News survey, as 125K jobs were added to the economy in August. This represents a modest pullback from the 163K created in July. This would represent a good reading nonetheless, as Atlanta Fed President Dennis Lockhart (perhaps the most moderate Fed governor) said this week that accommodative policy wouldn’t be warranted unless jobs creation was steadily “under 100K jobs.” This will be our gauge of more easing, at least of the LSAP variety going forward: as long as NFPs hold above 100K, no new major measures are likely to be implemented. Without knowledge of the August payrolls, it’s too early to call the US Dollar’s demise or rebound, and thus we take a neutral stance going forward. –CV