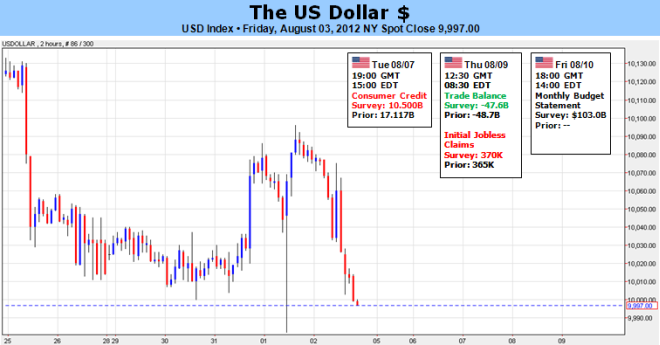 US Dollar Avoids Stimulus Threat but Without Fear Currency Flounders

It is important to always remember a currency’s primary place within the financial system. For the US Dollar, its role is as a reserve currency and primary liquidity provider when fear of collapse is at hand. Under more stable trading conditions or an outright rise in speculative positioning, the greenback quickly loses its footing as a competitive draw for capital. It is a difficult argument for Treasuries that yield a negative real rate of return when there is a high, positive rate to be found on modestly risky Italian government bonds. That is especially true if European and global officials are offering assurances (dedicating capital) that these assets will not collapse. That is the balance of power we face with the greenback moving forward. No immediate stimulus support has been fed into the system by the FOMC or ECB this past week (to boost short-term risk taking and inflate the money supply), but that doesn’t mean risk aversion is assured.

The dollar closed out this past week in an exceptionally weak position – not that surprising considering US equities closed at a three-month high. Yet, where yield and risk-laden stocks still have room to move to before returning to multi-year highs set back in March and April, the safe haven currency is struggling to maintain a gradual bullish bias that has held through the past year. The currency’s stubbornness is obvious with pairs like EURUSD and GBPUSD, but the best chronicle of its progress is the Dow Jones FXCM Dollar Index. The benchmark has carved out a series of higher swing lows since bottoming in July of last year on its way to setting a 22-month high at the start of June. This is an advance that has persisted despite the seeming risk appetite climb of equities and some other traditional asset benchmarks. Though correlations do change, the bullish bearings for the safe haven dollar and risk prevalent equities as well as high-yield currencies is a fundamental contradiction. And, it is unlikely to last much longer. One leg of this dichotomous push will fold.

Given the technical warnings on the Dollar Index, a bearish turn looks like an imminent risk. That said, the support for a risk buoyant position is exceptionally flimsy. Looking at the bedrock fundamentals, there is dangerously little to draw fresh capital into ‘risky’ positioning - much less justify new multi-year highs on US stocks. A week ago, the US economy reported further moderation in activity with an annualized 2Q GDP reading of 1.5 percent. That is far better than the Eurozone recession and risks that are present in the emerging markets pinned between credit growth and fading export demand, but it will likely catch up as the global freeze sets in. From the US 2Q earnings season, we have seen top line struggle overwhelm bottom line cost cutting so that confidence-to-valuations is at its lowest level since 1995. That is both a risk and a weight on the outlook for returns – which finds the net yield on 10-year government bonds of the majors hovering at historic lows. In a basic ‘risk-reward’ equilibrium, positioning risk (yield and growth) doesn’t look good at these levels.

The disconnect between the fundamental view and the current market position are created by external influences that prevent the two from reconciling. Stimulus is a big factor in the equation – expectations of more proving far more potent. With the Fed denying calls for QE3 and the ECB announcing it was unnecessary (or perhaps they were unwilling or unconvinced it would be effective) to increase its support of the region’s financial market, an immediate bullish catalyst is removed. There is still belief that more Fed buying will be realized next month and the ECB could activate its bond purchase program, but the chance for stimulus is growing more vague while the risks are growing more material.

This rebalancing will make markets more sensitive to headline developments that make reality all the more certain. Among the concerns to monitor are: the spread of the Euro-area debt crisis, emerging market capital outflow, the credit impact of slower growth and greater banking regulations. Flare ups on any of these fronts can occur at any time. Another, less defined but potentially more critical threat to be aware of is the worrisome increased frequency of financial shocks. Developments like the Libor scandal, Knight Capital’s high-frequency trading troubles, and firms like PFG and MF Global collapsing among other stories suggest the financial system is under real strain. – JK