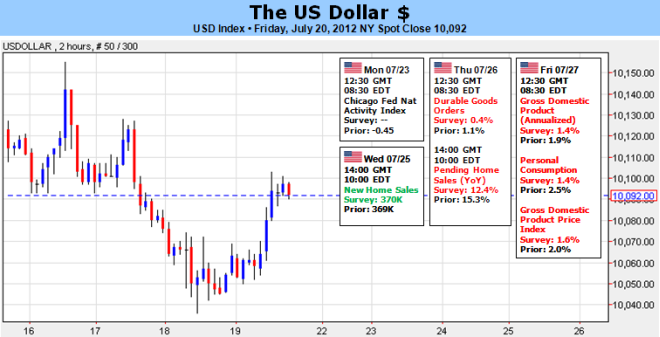 US Dollar: Will EURUSD or AUDUSD Define Our Bearing Next Week?

The dollar took a beating this past week, but ended Friday with a breath of respite. Before Friday’s 0.46 percent rally for the Dow Jones FXCM Dollar Index (ticker = USDollar) – notably, the biggest advance since the massive June 21 surge – the benchmark carved out a five day decline. That was the most consistent decline for the index since early April and by certain measures the most oppressive slide since November. The last-minute reversal was a welcome sign for greenback, but that move alone does not ensure a trend. To ensure a meaningful trend (be it bullish or bearish), we need the fundamental drive to incite action and maintain conviction.

There are a few different potential fundamental catalysts that can offer the greenback guidance over the coming week – but they will vary for influence for short-term volatility and contributing to a lasting momentum. The most immediate consideration for a catalyst at the start of next week is the fate of EURUSD. Given its status as the world’s most liquid pair, the progress that this particular rate makes can easily spill over to the rest of the dollar-based majors. That sets up a tense open to the upcoming trading week as the pair closed Friday at its lowest level in two years and finds itself on the threshold of igniting another, aggressive selling leg. You don’t have to be a technical trader to appreciate the midpoint of the EURUSD’s historical range at 1.2135 carries substantial weight.

Yet, the euro won’t simply cave because of its proximity to a meaningful level. Renewed concerns over the region’s financial trouble held the shared currency back amidst a rebound in risk last week and it sparked the intense move decline through Friday. There are plenty of angels to the Euro-area crisis; but to move us to the next phase, we need to see an escalation and possibly a clearer threat of a global pandemic. Last week, the vote to finalize Spain’s rescue drew little relief as the market instead focused on the shortfalls in this effort, the lack of clarity on bigger agenda items (using the ESM to directly rescue ailing banks and governments) and reports of fresh sovereign-level issues (a request for aid from Valencia). Sentiment surrounding the Euro-crisis is very much the product of expectations and the market’s focus. If investors are looking for a reason to sell the euro (and thereby buy the dollar), they will find it.

Another critical aspect of the Euro crisis focus is its potential to fan general risk trends. As the preferred safe haven currency, the choppy but persistent updraft in US equities (my preferred measure of risk appetite) since the low set in the beginning of June works against the dollar. The 2Q earnings session has not acted as the spark for either a return of confidence or its collapse as investors are monitoring both the EPS surprises (bullish) as well as the trends in revenue growth (bearish). Given the current status of the Euro Zone’s financial tension, diminished expectations for global growth and historically low rates of return; it wouldn’t take much to rouse fear.

In measuring ‘risk’, there are two considerations to keep in mind. An initial shock could help drive EURUSD to its critical break and turn the passive drift towards risk-favored assets; but to build a bullish trend for the greenback, we need a consistent risk aversion push. This is the kind of move that starts to meaningfully reverse the AUDUSD’s 850-pip rally these past few months. This kind of move would be visible across the markets and leverage correlations that are otherwise the reflective of investor sentiment itself. With implied volatility measures (measures of expected volatility and risk via options insurance premiums) for the equities and FX markets either at or near lows not seen since 2007, it is clear that the markets are dangerously oblivious to the tangible risks that financial systems and economies face.

A possible complication to a near-term swell in fear is the market’s bad habit of waiting for the next fundamental event rather than adapting to what’s already transpired. Friday, we have the US 2Q GDP reading which has a low probability of delivering a bullish surprise; but market participants have sat on their hands for less. Far more influential is the near omnipotent hope for QE3. The Fed and Bernanke have offered no joy on this front, and we won’t likely revisit the option until late August (the Jackson Hole Symposium). - JK