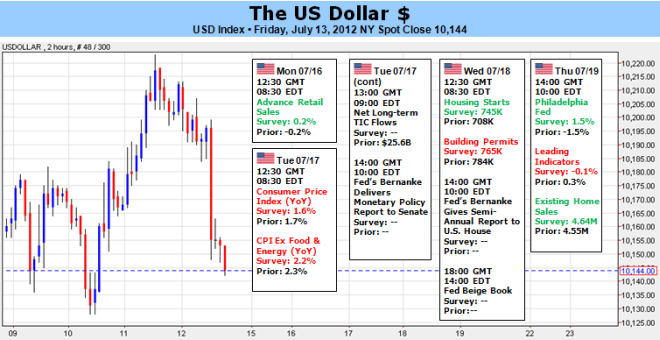 US Dollar: Time to Shine as European Troubles Not Going Anywhere

The Dow Jones FXCM Dollar Index (ticker: USDOLLAR) finished the week modestly lower on a sharp late-week selloff, but earlier signs of life suggest that the dollar remains comfortably within its uptrend and stands to gain in the weeks ahead.

The US Dollar rallied sharply following the highly-anticipated release of minutes from the US Federal Open Market Committee’s recent rate decision, but a sharp Friday sell-off leaves the Greenback slightly lower headed into the coming week’s trade. A relatively limited schedule of economic event risk likely signals that the USD will continue to trade off of broader financial market sentiment. This is especially true for the Australian Dollar/US Dollar pair and other commodity-linked currencies, as dollar correlations to the S&P 500 trade near record strength.

Thus whether or not the US Dollar trades higher will almost certainly depend on the trajectory of equity indices and broader financial market sentiment. Two key themes on international investors’ minds are fairly clear: the future of US Federal Reserve Quantitative Easing (QE) and the ongoing European fiscal and financial crises.

On the home front, US Dollar bulls reacted positively to signs that the Fed struck a cautious note towards the possibility of further QE in recently-released FOMC Minutes. The Greenback weakened materially through 2009 on the first wave of QE and fell sharply as markets accurately anticipated QE2 in 2010. The US currency could give back some of its recent gains on any future announcement of QE3. Yet the Fed’s caution emphasizes that the next wave is far from a done deal, and the US Dollar could remain strong as the Fed holds the line on further balance sheet expansion.

Across the Atlantic, European fiscal and financial crises continue to force significant financial market turbulence and could keep broader risk appetite depressed through the foreseeable future. Moody’s Ratings Agency was the latest to pour fuel on the fire as it downgraded Italy’s sovereign credit rating. The move itself was perhaps unsurprising, but the timing of the downgrade seemed to catch many traders off-guard. Italian Government 10-year bond yields quickly traded towards the top of their multi-month range as traders reacted to the news. (Bond yields move up when prices go down)

Instability in the Euro Zone’s third and fourth-largest economies (Italy and Spain, respectively) is arguably the most immediate risk to the Euro currency. We'll keep a close eye on Spanish and Italian government bond yields—especially as Spain's 10-year trades dangerously close to the make-or-break 7 percent mark into Friday’s close.

The safe-haven US Dollar stands to benefit accordingly from any flare-ups in European market tensions. Recent sell-offs in Spanish and Italian bonds (rise in yields) emphasize that markets remain tense despite the recently-announced Spanish bailout and other pro-growth European measures. Continued turbulence favors remaining long ‘safety’ and short ‘risk’—long US Dollars and short Euros.

Our shorter-term bias is clear, and we believe that the recent US Dollar breakout may only be the beginning of a larger rally. Much of Dollar outlook will nonetheless depend on whether the US S&P 500 holds critical support levels. A breakdown in financial market risk sentiment would quite likely produce the US Dollar rally we’ve expected. - DR