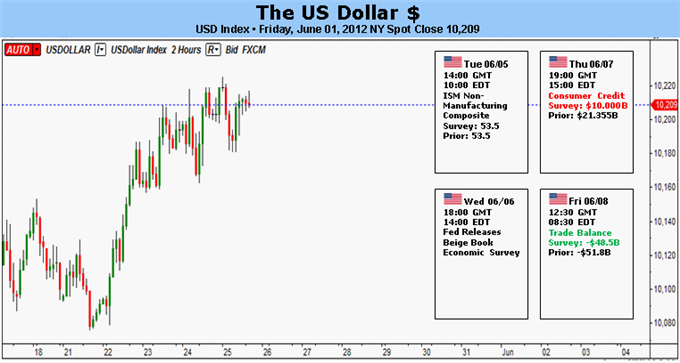 US Dollar to Correct Broadly Lower Before Larger Advance Resumes

The US Dollar finished the trading week on a negative note after setting a fresh 18-month high against its top counterparts as a dismally disappointing US employment report sent prices tumbling. The logic driving the selloff seemed to center on the growing possibility of a third round of Federal Reserve quantitative easing (QE3) in the face of a sagging US recovery. This would presumably dilute the greenback, producing sharp losses akin to those seen in the wake of the central bank’s previous QE efforts. This logic seems misguided however.

US borrowing costs are finding their way lower just fine without the Fed’s involvement. The yield on benchmark 10-year Treasury bonds fell to a record-low 1.45 percent last week as Eurozone sovereign risk fears drove haven-seeking capital into US debt. After adjusting for inflation, the yield actually stands at -0.60 percent, meaning investors will effectively pay the US government 60bps per year to look after their money. With the situation in Europe hardly on the mend, yields are likely to remain under pressure for some time, meaning the marginal benefit of a QE3 program would be very small at best and arguing against a further expansion of the Fed balance sheet.

With this in mind, the Dollar’s performance likely owed to little more than profit-taking. The primarily catalyst for the Dollar’s sharp rally over recent weeks has been risk aversion rooted in growing fears of a Greek exit from the Eurozone. The slump in sentiment has been compounded by evidence of mounting headwinds to global economic growth from a recession in Europe and deep slowdown in Asia. While none of these concerns have been meaningfully resolved, the stock of fresh negativity to drive continued selling in the risky asset space is arguably running dry, opening the door for a bounce.

The EU leaders’ summit held earlier this month made it unequivocally clear that policymakers intended to stand aside until Greece installed a coherent government and would only then deal with whoever takes the reins to establish a path forward. This effectively puts the core concern vis-à-vis Europe on hold until the second attempt at a general election is carried out in two weeks. Meanwhile, the economic growth landscape is dire but not thematically unfamiliar to investors considering the general outlines of performance trends in the globe’s key output engines has been well-established for some time.

On the domestic data front, a relatively quiet docket awaits in the week ahead. The service-sector ISM print and the Fed’s Beige Book survey of regional economic conditions amount to the only top-tier items on the calendar, with neither outcome likely to offer much that traders have not priced in already. Fed Chairman Ben Bernanke is also due to testify before a joint session of Congress, which traders will certainly pay keen attention to for QE3 clues. Although the central bank chief is likely to remain uncommitted – relaying a familiar message additional stimulus still “on the table” but “reckless” if it means sacrificing price stability – he seems sure to acknowledge the recent down turn in US data. Markets may once again accept this as a dovish-enough posture to sell the greenback, amplifying the pullback until Greece-related worries reemerge to reboot the uptrend toward the beginning of the following week. - IS