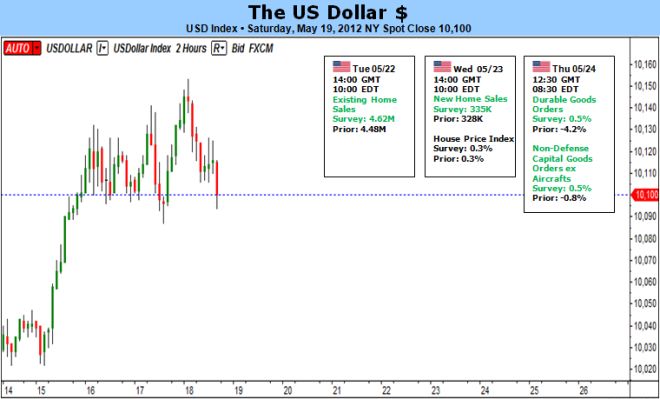 Though the benchmark currency eased back into the final 48 hours of this past trading week, the dollar nevertheless posted another impressive run through the entire period. A third consecutive weekly advance for the Dow Jones FXCM Dollar index marks the best run for the currency since November of 2010 and subsequently posts its highest close in 16 months. By all accounts, this is a bullish turn. However, in these impressive statistics, there is still something lacking – momentum. Sure a rally that posts 11 bullish days in 15 trading sessions (marred only by very small setbacks) is inspiring, but progress is still in its fledgling state having just crossed the multi-month threshold. What are we missing? True fundamental support.

It may seem peculiar to suggest that the US dollar is lacking for fundamental drive considering the burn of risk aversion and speculative deleveraging is so obvious across other assets. Most prominent is the S&P 500’s tumble this past week. The benchmark equity indexes are the best measures of risk appetite given the strong correlation between Fed-based stimulus and the US stock market’s performance. Having assumed the role of global safety net years ago, the US central bank has acclimatized the investors to expect a shot of support (additional stimulus) every time the perception of wealth fades. All that said, the S&P 500 dropped 12 of the past 15 trading days to a four-month low. Furthermore, Friday’s plunge was highlighted with the largest swell in volume (the second largest this year).

In risk aversion, traders will first unwind positions deemed excessively risky and then start to move into true safe havens. These are two distinct stages – and subsequently, it is a primary reason USDJPY has shown its consistent decline these past months. While the greenback offers safety, it does not offer a competitive yield. In fact, most low-risk or risk-free assets (the only academically risk-free is Treasuries) have negative, real interest rates – adjusted for inflation. If there is no return on the investment – and you may even lose money on it if you stick with the entire holding period – the market must be strongly motivated to buy into the US. And, nothing motivates better than panic.

We have certainly seen risk aversion to this point, but outright fear has been held in check. We can see this in various measures of financial stability. Credit markets are healthy, there are few signs that Europe’s troubles pose an imminent threat to the US system and even the capital market slide has been orderly to this point. On the other hand, implied volatility measures for the equity, currency and commodity markets are starting to pick up. Default risk premiums are starting to rise. There is a notable shift to shorter-term maturity debt. These are early and lower-impact signs of trouble ahead.

As we move forward, to support the dollar’s push to a serious bull trend, we need to fall within a specific band of sentiment. We certainly need risk aversion to keep the currency on the bid. There is an ‘anti-euro reserve’ quality to the greenback, but that isn’t active enough to keep leverage the heights are already scaling. Alternatively, if risk aversion grows too intense, we risk rousing the attention of the Fed and fellow global policy groups. Though stimulus programs have shown a diminish impact on source currencies (for the Fed, it is the dollar), the short-term impact would certainly be detrimental. We have a G8 meeting this weekend, but conditions are not likely volatility enough. – JK