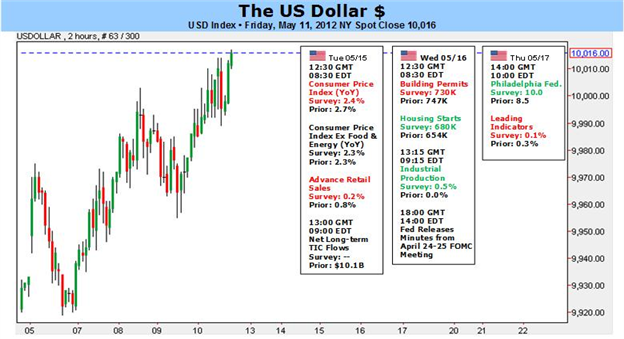 The markets are stirring and a number of currency crosses and benchmark assets are starting to show genuine progress towards deleveraging risk. That said, we haven’t yet made the critical transition in sentiment that overwhelms expectations of the unlimited stimulus safety yet. For the Dow Jones FXCM Dollar Index (ticker = USDollar) to move from congestion to a true bull trend – something not seen since the first half of 2009 – an escalation of risk aversion must be made. We need to see volatility spike as the cost of insurance against losses soars while the stalwart barometers of risk appetite suffer disorderly declines. It is in that level of tumult where the greenback once again shines for the stability seen in its liquidity.

Risk appetite trends are at the root of all investment decisions made, and thereby we can garner a solid fundamental assessment of each currency by establishing where it stands on the ‘high-yield-to-safe-haven’ spectrum as well as how the current of investor confidence is flowing. As for the spectrum read, the assessment isn’t difficult. The dollar is indisputably a safe haven. In fact, its treatment during the 2008 Financial Crisis has sealed its role as an absolute liquidity haven – a ‘last resort’ quality. That said, there is a favorable aspect in that – though the Fed has flooded the market with dollars – there is relatively limited cross boarder carry interest as the market is hesitant on exceptionally thin differentials and there is a heightened concern that the US will be hiking around the same its global counterparts will.

Therefore, dollar traders should really focus on the ebb and flow of risk appetite. And, that is why trading conditions look so ripe: because sentiment is starting to falter, but it has yet to really capsize into the panicked territory that leverages the greenback so well. This is the difference between seeing small swings in favor of the dollar within broader confines of congestion (USDollar) or perhaps more consistent advances against particularly weak currencies (AUDUSD) and an outright, market-wide bull trend. To measure the dollar’s potential, there are a few gauges to watch: the USDollar, the Dow Jones Industrial Average and volatility readings.

Watching the dollar index and the benchmark US equities index offers a straightforward technical assessment of progress: the currency has 16-month resistance at 11,000 and the stock aggregate spots three-month support at 12,750. The Dow however carries another particularly important fundamental characteristic though – its connection to the stimulus efforts (and speculative of stimulus efforts). In other words, US equities tumble it suggests that confidence in further government/central bank support has evaporated or (far more troublesome) the masses simply believe it cannot stop the deleveraging. That said, a full-blown crisis – arguably the best situation for rapid dollar gains – could actually prove detrimental. If the fabric of the financial system once again begins to come apart, it could spur the Fed and its global counterparts into action. It is really the Fed, though, that is the worry for the dollar.

We know how to measure where the dollar is positioned for potential and kinetic energy, but it’s the catalysts that get us moving that are important. We can point to many individual indicators and events as possible sparks next week (CPI, retail sales, net investment, the Fed minutes), but a change of this magnitude requires tapping into the elemental themes. At this point, the European financial troubles are the greatest threat to global financial stability and thereby present the most likely driver. Already on the cusp, if the Euro-area situation erupts, we have a dual appeal: demand for safety and the shrinking of the most prevalent alternative to the US dollar’s reserve status. – JK