US Dollar – Elections in Greece and France to Drive Greenback 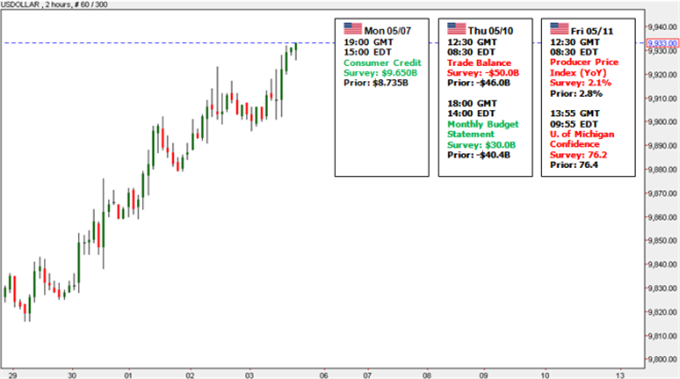 The US Dollar (ticker: USDOLLAR) rallied sharply off of multi-month lows despite clear disappointments in US Nonfarm Payrolls data, setting the stage for further USD strength as it challenges key short-term highs. The question is—can it break to fresh peaks?

Last week the Dollar Index seem coiled to break strongly in either direction on a pivotal week for news and price action. It briefly tested important lows, but the USD bounced strongly on the sudden flight to safety and targets resistance. A nearly-empty US economic calendar suggests that volatility will remain low, but recent price action emphasizes that sharp moves can happen at a moment’s notice.

Traders should watch for surprises out of the weekend’s elections in France and Greece—especially as news out of Europe was one of the major catalysts for the Dollar’s sharp rallies into Friday’s close. French elections are of interest as all signs point to victory for Socialist candidate François Hollande over incumbent Nicolas Sarkozy, but Greece may prove the bigger market mover.

Many claim that Hollande’s tax-and-spend agenda could put further pressure on France’s fiscal balances and a Socialist victory could push the Euro lower. In this author’s opinion, however, neither candidate has presented anything that resembles real commitment to closing fiscal deficits. In other words—French debt won’t meaningfully shrink under Sarkozy or Hollande. Is it possible a Socialist victory puts pressure on the Euro and pushes the US Dollar higher? Perhaps, but a major Dollar breakout seems unlikely on such news.

Elections in Greece could otherwise spark market tensions and USDOLLAR volatility, and this might ultimately be the bigger market-mover on any disappointing results. Why? The ruling Socialist Pasok party looks certain to lose as Greeks punish the politicians who have presided over two years of biting austerity measures. The rise of fringe anti-bailout parties means that it will be difficult for the Socialists or the Conservatives to form a ruling coalition, and Greece may very well be without a government through the foreseeable future. These elections could leave Greece without the ability to enforce bailout agreements and ultimately lead to a Greek debt default.

What of US economic data? April US Nonfarm Payrolls figures put a damper on growth forecasts for the world’s largest economy, and a light week of domestic news releases is unlikely to change that. Yet we don’t want to overstate the effects of lackluster NFP’s; few expected the strong results seen in January and February to continue. So we end the week where it began: it’s clear that the US economy continues to grow at a moderate—if unspectacular—pace. Such figures will keep US Federal Reserve officials reasonably happy as growth is too slow to warrant higher interest rates but strong enough to make further easing unnecessary.

We’ll keep an eye out for further surprises out of lower-tier economic data in the days ahead. Yet the real fireworks are likely to come on the weekend’s developments out of Europe. If there are any strongly negative surprises out of Greece or France, expect the US Dollar to trade higher. – DR