US Dollar Collapses to Two Month Lows but is This a Trend? 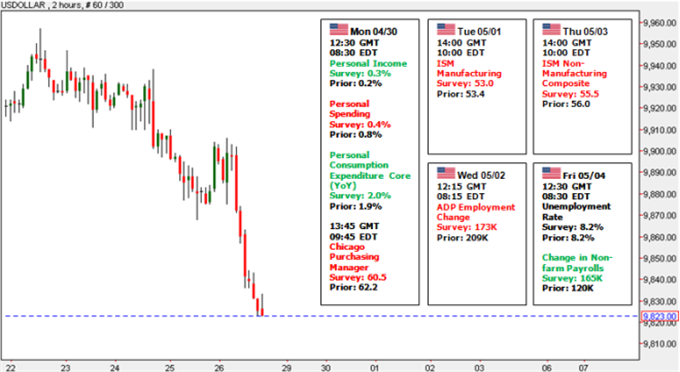 Without doubt, the most remarkable event in the FX market this past week was the Dow Jones FXCM Dollar’s critical, bearish break through the final 48 hours. Against the backdrop of a tightened Fed approach and deteriorating growth / financial market readings (typically the fodder for greenback bulls), the benchmark currency actually succumbed to a break of overwrought congestion and slid quickly to lows not seen since the beginning of March. What makes this even more remarkable is that the sizable selloff from this reserve currency contradicts the general restraint of the broader markets. Other currencies and asset classes hold stubbornly to well-worn ranges and activity readings are at or near their lowest levels since before the 2008 Financial Crisis hit its crescendo. So, is the dollar leading the way (usher in a risk appetite run and its own bear trend) or destined to be knocked back into line (post a recovery)?

As we have seen many times in the past, the few markets or individual assets have the ability to diverge from the general course of broader capital flow and underlying fundamental trends. Yet, rarely do market-wide shifts occur all at once – in other words, there is often a leader. To gauge which situation we are dealing with here, we should refer to the fundamentals. This past week was particularly unusual given the headlines. Growth data in the US, UK and Euro Zone notably disappointed; while the Federal Reserve suggested it was tightening the reins on its profligate stimulus approach, yet that roused neither risk aversion nor money supply appeal for the greenback. Why?

At its very foundation, the US dollar plays the role of the world’s primary reserve currency. This naturally makes it a strong performer when fear and deleveraging force capital into the most liquid and trustworthy corners of the financial market. However, nowadays liquidity comes at the price of anemic return thanks to the Fed’s loose policy approach. Therefore, the market needs to be truly panicked to forego all interest in return in manipulated Treasuries (the benchmark for safety in a safe haven region). Panic is something we don’t have. In fact, if we look at measures of implied volatility (themselves measures of risk premium), we find that fear is extremely low – many are at their lowest levels since the middle of 2008. Whether this is naiveté or a genuine state of strength remains to be seen.

Things are quiet…too quiet. There are certainly periods of market stability, but those usually come when underlying economic and financial conditions are strong. The situation now is anything but. In addition to the United States’ slowdown in economic activity (the annual reading was 2.2 percent for 1Q), the UK pitched into recession, China’s boom slowed further to multi-year lows and baseline forecasts for the Euro Zone are for a double dip. Furthermore, we have issues with a revived Euro Zone debt crisis, China has its own lending bubble, Japan and Switzerland are revving up their intervention effort and the world is nursing a massive credit problem. This reality is incompatible with steady growth in asset prices.

Perhaps that is why there is so much sidelined capital. While banks and investment firms (who have to put their money to work in order to survive) are surely putting funds to work, much of the non-professional liquidity is still outside the arena. That in itself helps curb meaningful swings as the different groups don’t ebb and flow in their exposure. Another trouble for the dollar is the temporary fix of global stimulus. While the Fed may be reining in its position of unlimited stimulus, others have moved to support their financial markets and thereby have bolstered capital market sentiment. The ECB, People’s Bank of China and Japan have all ramped up their support. – JK