US Dollar – Breakout or Breakdown Nearly Inevitable on FOMC, GDP 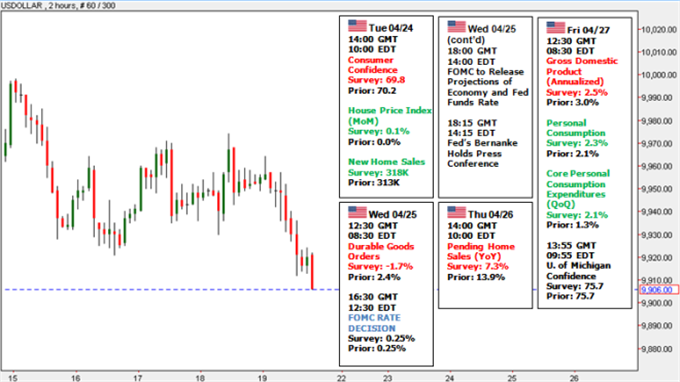 The US Dollar (ticker: USDOLLAR) refused to break above key resistance or below significant support for yet another trading week as financial markets remain as indecisive as ever. The coming week’s US Federal Open Market Committee (FOMC) may prove especially market-moving as traders look for clarity. Yet fresh monetary policy action seems quite unlikely, and it may take a substantive shift in Fed rhetoric to push the US currency beyond its recent trading range against the Euro and other major counterparts.

Disappointments in recent US economic data set the stage for a more dovish FOMC through Wednesday’s rate decision and leave risks to the downside for the Dollar. But economists predict late-week US Gross Domestic Product growth data will show robust US growth through Q1 and may offer some support for the dollar.

Yet it feels like we’ve been here before: big economic data on the docket, and any surprises could theoretically force a USDOLLAR breakout or breakdown. Time will tell whether or not we actually see those big breaks.

All eyes turn to the US Federal Reserve as the FOMC announces rates. Fresh interest rate moves are exceedingly unlikely, but Fed officials will issue guidance on future economic conditions and their internal predictions for future rate moves. Recent weakness in US Nonfarm Payrolls and US Initial Jobless Claims figures could translate into more dovish forecasts. Furthermore, speculation remains rife that slower jobs growth could push the Fed to enact further policy accommodation through Quantitative Easing measures (so-called QE3). Needless to say, any hints at lower interest rates or QE3 could force significant US Dollar losses.

The Greenback could see further volatility on Friday’s US GDP growth figures for the first quarter, and lofty expectations suggest risks remain to the downside on the increased likelihood for disappointments. Economists predict that favorable weather in the US and better-than-expected performance out of the Euro Zone made for strong economic growth in the first three months of the year. Indeed, robust domestic economic data supports those predictions. Optimism may limit strong price reactions to higher-than-expected growth, while disappointments could sink the US currency.

So where do we see resolution? If anything it feels like overall risks remain to the downside as the Dow Jones FXCM Dollar Index remains dangerously close to important support, and financial markets remain skittish as traders look for direction across the board. It is entirely possible that a USDOLLAR breakout could signal a bigger shift for stocks and other major asset classes. Our Senior Technical Strategist warns that the USDOLLAR is coiled to the extreme. In other words – the next dollar move could be big. Which direction is anyone’s guess, but we’ll keep a close eye on key events in the week ahead and their effects on major USD pairs. – DR