US Dollar Ready to Break Impasse, Eyes on Earnings and Rates 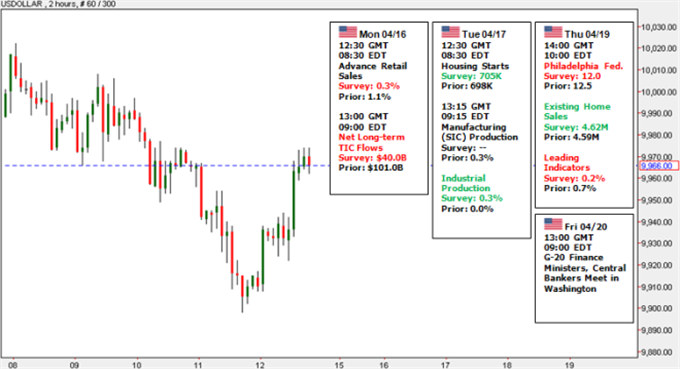 At any moment in the market, there are hundreds if not thousands of fundamental dynamics that factor into the fair value of the US dollar. Yet, there are only a few considerations that maintain a meaningful and lasting influence over its strength. For the greenback, going forward, we should remain focused on two aspects in particular: risk appetite trends and the outlook for monetary policy (not just the Feds). This is especially critical now as it seems that debate over the future of both has hit a fever pitch. Under such intense scrutiny, the acceptance of large trend shifts is at its height. And, at the very least, healthy debate within the market presents a case for volatility.

If we look at a long-term correlation between the Dow Jones FXCM Dollar Index and the S&P 500 (as a benchmark for underlying investor sentiment), it is clear that the link between the two is exceptional and fundamentally derived. In other words, when global investors need safety, they transfer their assets to the deep liquidity of the US Treasury and money markets – having to buy the dollar along the way. That being the case, why was the greenback struggling at the beginning of last week when equities were tumbling?

While the world’s most liquid currency is a near-eternal safe haven, a funding currency status is an unusual role. With the Fed’s aggressive regime of rate cuts and expansive stimulus effort these past years, though, the flood of cheap funds has encouraged large scale borrowing for investments abroad. That is where the negative reaction to positive sentiment comes in. It is also is a complicating factor in the most recent deleveraging move. In the previous three weeks, the benchmark 10-year Treasury yield broke congestion above 2.10 percent and surged to a four-month high. This had the notable influence of weakening the currency’s role as a funding currency and thereby offering the dollar a fundamental boost to counteract stubborn buoyancy for traditional risk measures. That said, when risk slid this past period (normally bolstering the dollar’s appeal), the positive influence was offset by a drop in the benchmark yield (reviving its funding status).

We must respect the balance between the dollar’s safe haven appeal and its unnatural (but persistent) role as a funding currency under firm risk appetite winds. That said, it is important to understand what the most prolific catalysts for these market dynamics are. For risk aversion, we have plenty of drivers with potential energy. The renewed Euro-region financial trouble is a clear leader, but we should also follow the pace of the US 1Q earnings season as it hits high gear as well as commentary issued by Fed officials. These can materially change the balance of sentiment as well as the US benchmark yield.

Over the coming week, the docket for Fed speakers is relatively robust. The market is carefully combing through the rhetoric from each speech. At this point, the convictions of the various members are well-known and thereby priced in. To change the consensus on the possibility of another stimulus expansion (which is losing favor) or the timetable for the Fed’s first rate cut (now seen before 2014), we need to see someone change their position. Another interesting nuance for rate watchers, the consensus for the current voting members isn’t as important as the balance amongst the opinions of those that will be voters in 2013.

For market participants, stimulus is a boon. For dollar traders, it is a burden. Therefore, a shift away from balance sheet expansion from the Fed would be an encouraging factor for the US dollar – by both curbing errant speculation and by changing its status from outright funding currency to one that is closer to neutral. Yet, the Fed isn’t the only central bank acting to stabilize the system. The ECB, Bank of Japan and People’s Bank of China have all boosted risk trends through their own efforts. Dollar traders need to keep a global view. – JK