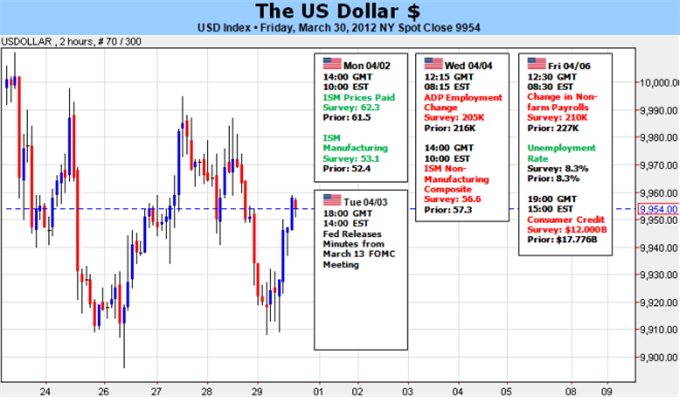 Since we are at the beginning of a new week, month and quarter, it is worthwhile to reflect on the progress of the world’s most liquid currency. As it happens, the Dow Jones FXCM Dollar Index (Ticker = USDOLLAR) is little moved on all three accounts. Will the market finally apply direction to volatility this coming week? Can NFPs possible turn the tides? For the fundamental traders out there that have kept followed the impact of various scheduled and unscheduled catalysts, they know that has developed through the traditional scope of event risk. What really matters when it comes to revive trend – bullish or bearish – is a consistent appetite for yield or safety.

Before we talk about the true threats for volatility and trend development over the coming week for the greenback, we should first flesh out the possible scenarios for the media’s favorite monthly employment report. A week out, the Bloomberg consensus forecasts amongst economists is calling for a 205,000-person net addition. For comparison the average actual reading over the past six months is a 201,000 increase and the past previous two readings beat expectations by 17,000 and 144,000 respectively. But what has that translated to in price action? The modest January improvement was overlooked in favor of the drop in the jobless rate (to 8.3 percent) and unusually – both dollar and S&P 500 swelled. For February’s blowout, neither budged – and the unemployment rate held unchanged.

The probably with the labor statistics release is two-fold. First, employment trends are well known; so the thresholds for QE3 and the first rate hike are each benchmarked and far away. Second, the data is released on a Friday; which naturally curbs the effort to generate momentum behind a consistent rally or selloff. Add to that a third issue for this particular event: the data will be released in its usual Friday slot, but that is also the Good Friday market holiday. That means, we will be lacking a lot of the liquidity behind a risk-trend response for the data. What that translates to is an extra boost in short-term volatility, but follow through will be an even more difficult to generate.

However, we shouldn’t write off the dollar’s potential on this alone. The masses are increasingly coming to terms with the reality that the dollar isn’t driven by standard event risk anymore. What truly matters are the underlying currents for capital flow. Recently we have started to take the ‘return’ aspect of the greenback a little more seriously because the extremely low yield on the dollar leverages any modest uptick in rate expectations (whether bringing it a little closer to its return as a carry currency or sparking an exodus on carry exposure funded through the benchmark is debatable). Through overnight swaps and Fed Funds futures we see that there is greater weight given to a 2013 rate hike than the 2014 the Fed threatened. More tangible, the US 10-year rate has notably retraced its March 13th to 20th rally to five-month highs, but the move above 2.10 still stands.

Where the dollar can really tap its potential however is through its ‘risk’ standing. Rather than representing an inherent risk unto itself, the world’s most liquid currency represents a harbor for capital seeking refuge. And, though talk may be shifting from QE3 to rate hikes over the hill, there is immediate potential and fulfillment if a wave of panic races through the capital markets. Such a move would send investors scrambling for the safety of US Treasuries, money market funds and the dollar in general. And given the exceptional heights of equities, there is plenty of room for unwinding to meet fresh shorts from sidelined money under the right conditions. – JK

To be added to John’s email distribution list, send an email with the subject line “Distribution List” to jkicklighter@dailyfx.com