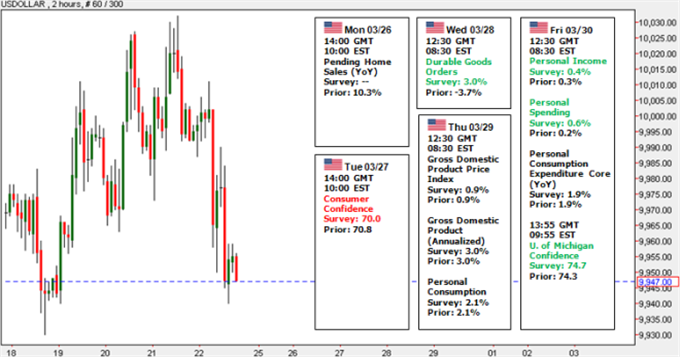 The Dow Jones FXCM Dollar Index (ticker: USDOLLAR) looked as though it would break above critical 8-month highs and end its longer-term downtrend, but a significant turnaround leaves the Greenback poised for further losses into the final week of March trading. Extremely strange price action in US Treasury markets nonetheless warns that it will be anything but a straightforward week of trading.

The past week looked as though it could produce the US S&P 500 decline and US Dollar recovery that seemed inevitable, but markets clearly had other things in mind as late Friday moves kept both above and below key technical levels. Foreseeable economic event risk remains limited in the week ahead, but any (unlikely) surprises in final revisions to Q4, 2011 US Gross Domestic Product growth numbers or Federal Reserve commentary could spark major moves. So what do we watch?

Markets seem at somewhat of a crossroads as the USDOLLAR continues to fail at major resistance levels, while US Treasury Yields pull back sharply from recent highs. The simultaneous declines in both US yields and the USD itself are not necessarily linked. With the clear exception of the US Dollar/Japanese Yen, Treasury bond yields have not historically correlated with major US Dollar pairs. Yet we can’t help but think that there is more to recent Treasury moves than normal trading dynamics. For one, we think that the US 10-Year and 30-Year Treasury yields have set a significant long-term bottom.

What does that mean for the US Dollar? Going by the strong correlations between Treasuries, stock markets, and USD, high yields would point to a higher S&P 500 and a weaker USD. Yet stocks did not rally as much as yields should have implied, and cross-market correlations have seemed strange at best and broken at worst. To introduce further confusion, both equity market options traders and FX options traders seem incredibly complacent; the S&P 500 Volatility Index (VIX) is at lows not seen since the early stages of the financial crisis in 2007 and our DailyFX Volatility indices are near similar troughs. In other words—traders are betting on and hedging against extremely small moves in equities and currency markets.

Such views imply that markets are completely normal, but we can’t in good faith consider it normal that US Treasury Bonds would fall for 9 consecutive trading days and post their worst percentage declines since Euro Zone tensions hit fever pitch in October, 2011. During that month, the S&P 500 dropped to yearly lows and the so-called “Fear Index” in the VIX traded at three times its current price. It would perhaps be easy to claim that Treasury moves are mostly isolated, but the sheer size of the Treasury market means that the volume of trades really should be forcing much larger moves in other markets. Where does this leave us?

There are many questions and few answers for the US Dollar in the week ahead. And in the absence of a clear catalyst in price action, we’ll always defer to the broader trend. The S&P 500 trades near multi-year peaks while the Dow Jones FXCM Dollar Index continues to fail at critical resistance. All else remaining equal, we expect to see a lower USD in the days ahead. Yet recent market dynamics warn that volatility could rear its head at any moment, and caution is advised amidst such clear trader complacency. - DR