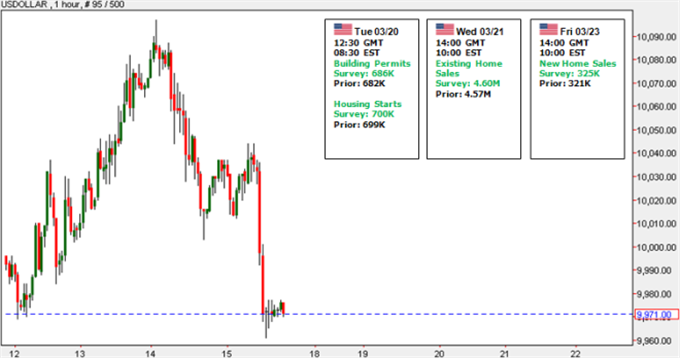 The dollar took an abrupt, bearish turn through the final 48 hours of this past trading week. The fact that this move turned the currency back onto its traditional ‘safe haven’ track suggests its extraordinary bull run may have come to an end. And, for the technically inclined, it is worth noting that the timing for this turn aligned nicely to a test of 10,100 for the Dow Jones FXCM Dollar index (the range high going back to January of last year) and 1.3000 for EURUSD. When fundamental drive flags, technical barriers often have greater influence over price action.

Where we go from here will likely be a combination of inherent fundamental concerns, underlying speculative interests and ever-present technical influence. Through the past few weeks, we have seen a remarkable shift in long-standing correlations. Perhaps one of the most recognizable links for the markets over the past few years has been the dollar’s position as a safe haven currency (for better or worse). We have come to expect the benchmark currency moving in the opposite direction as ‘beta’ market standard like the S&P 500 or carry trade. That said, we witnessed the equity index drive through the even 1,400 figure while the Dollar Index advanced to the aforementioned range resistance.

This unusual set of circumstances can be attributed to a number of factors: a faulty equities rally that is ready to collapse; a systemic change in the greenback’s function as a funding and liquidity currency; or perhaps it was simply the reflection of lacking conviction behind the one thing that has synced all these markets up: risk appetite trends. In reality, it was a little bit of all three. For the greenback, safe haven appeal does not necessarily translate into an ideal funding currency for carry interest. Yet, with rates anchored to zero, the capital markets awash with stimulus and the Fed vowing to keep the policy reins loose until 2014; the currency has easily fallen into the role.

That said, when we are at this extreme on the spectrum, there is a greater sensitivity to even modest shifts in fundamental changes. Just as we would expect the first rate cut (or expectations of that outcome) to drive a high yield currency like the Aussie lower, when the extremely favorable carry terms for the dollar come under duress; we see an outsized reaction from the market. With the Fed policy decision this past week, that button was pushed. Furthering the concern from the previous week that Chairman Bernanke didn’t offer an easy track for QE3 timing, the policy group gave an improved growth outlook and curbed expectations of another round of stimulus (much less a near-term injection). Indeed, the swaps showed the rate outlook moved up the pricing in of a 25bp hike from mid-2014 up to the third quarter of 2013 and 10-year Treasury yields advanced. However, is this a sustainable trend. Would the market start a rally this early on such distant expectations of what will be a tame return to higher rates? It is unlikely.

What matters once again are risk appetite trends. If capital markets (S&P 500) continue to climb on the outlook for firmer growth and stable, low rates; a low-yield dollar will likely fall back into its comfortable correlations. There will also be a ‘premium’ that was built into the dollar’s strong run on rate expectations that could also work against the currency early in the week given a ‘risk on’ market. However, we shouldn’t necessarily write off the alternative, underlying scenario: a genuine risk aversion shift. If the capital markets’ performance has found any traction on stimulus, the risk that the next move from the primary policy authority is a cut could break sentiment trends. – JK