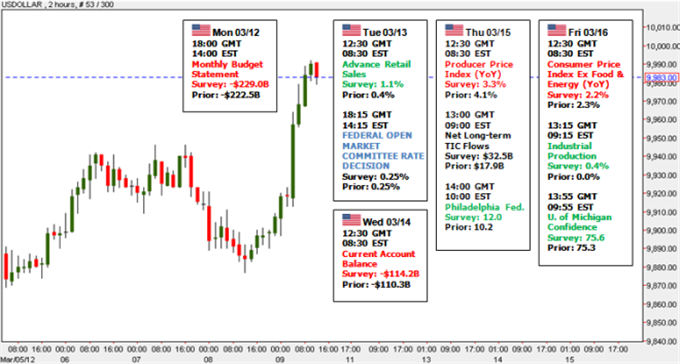 The dollar rally against every one of its liquid counterparts this past week. That is a remarkable feat when we consider the fundamental headwinds that the currency was facing. First of all, the Euro seemed to clear a major hurdle in its return to financial health – theoretically diminishing the need for a primary counterpart. Furthermore, the February NFPs would print a better-than-expected read to extend the best six-month run in job growth since 2006. Those that have followed the greenback for any amount of time know that a positive read for economic activity is actually a burden for the safe haven currency. While the euro and benchmarks for risk trends (I prefer the S&P 500) are generally edging higher, the dollar is still clearly outperforming. And, when negative news is downplayed while the positive is leveraged, we have the foundation of a bullish market. Now, all we need is the ‘positive’ to fuel a true rally.

Though it may seem counterintuitive, the dense round of event risk that lorded over the markets last week was more of a dampener on price action than a catalyst. Heading into a release or event that can dramatically change the fundamental landscape and fuel volatility is a clear curb on trend development. Furthermore, when we finally absorbed the long-awaited headlines, we found that the outcomes were generally in line with expectations and the market was therefore well-positioned. It’s with these disruptive (and ultimately ineffective) episodes behind us that price action becomes productive. Now, the markets can actively reflect on the long-term outlook for risk trends.

I have been dubious of the climb in equities, capital markets and general investor sentiment for some time, but the conviction of the masses is not always bound by sound reasoning. In the absence of expectations for higher yields and growth, stimulus can sate an addiction to capital gains. However, it is in that dependence that we could finally see the current bull phase collapse. Under the assumption that the advance in growth-linked assets to multi-year highs has been geared by the collective support of the world’s central banks and governments, there would be diminishing marginal utility. We need more stimulus to take the vital next step and symbolically carry us to new highs (above 1,400 for the S&P 500, beyond 13,000 for the Dow, to fresh record highs for AUDUSD, etc).

In this moral hazard withdrawal, the speculative ranks have started to look months ahead to price in the potential release of the Fed’s next stimulus program. Why the Federal Reserve? Because its programs are the largest, it taps into the heart of the global speculative market and the subsequent low rates feed an attractive carry funding source. Yet, is talk of QE3 reasonable or overblown? Doubts that it is even a consideration should be banished by the S&P 500’s negative reaction to Fed Chairman Bernanke’s avoidance of the topic in recent testimony. We will test just how reliant the market has become in the upcoming week with the FOMC rate decision. We should look for any mention of ‘scope’ or ‘possibility’ of further easing ‘if it’s needed’. If the stimulus pump is left off the ticket and the central bank sticks to the improved economic outlook defined in the Beige book, QE3 hopes for later in the year will start to look outlandish.

A bad reaction from capital markets to a no-stimulus outcome would be a major boon for the greenback. If stocks and other speculatively-guided markets are overleveraged, an unwinding could very well be disorderly (especially from these heights). Volatility and risk aversion are the dollar’s forte. Furthermore, a shift away from further stimulus will shift the focus back on the growth/inflation balance. And, after this past Friday’s NFPs, we will have a leveraged interest in next Friday’s CPI figures. With headline readings already running hot at 2.9 percent (and core above target themselves), that outlook for further QE could turn into fear of tightening the reins. – JK