US Dollar: Is This the Turn We’ve Been Waiting For? 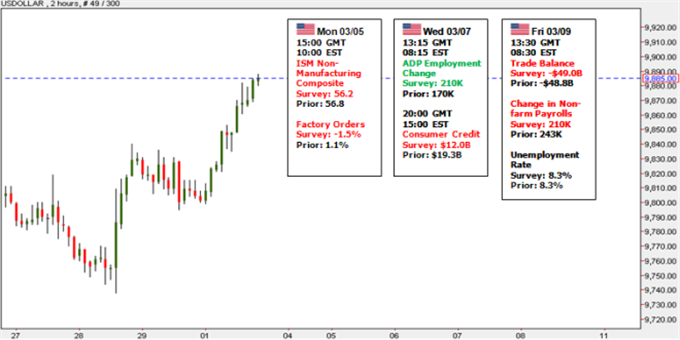 The coming week promises a pickup in US and global economic event risk, and further USDOLLAR volatility seems all but guaranteed. The obvious question is whether late-week USD strength is the start of a larger reversal. Friday’s US Nonfarm Payrolls data is clearly likely to spark trader interest, but trends are typically set through early-week trading. It will be important to watch how the Greenback starts off the first full week of March trade; the beginning period of any time frame most often sets the pace for remaining price action.

What could cause a significant US Dollar breakout and further strength? Put simply, the traditional safe haven currency will do well when “risk” does poorly; if speculative investments such as stocks and commodities turn significantly lower the US Dollar would likely continue higher. Yet if the US S&P 500 resumes its march towards fresh multi-year peaks, expect the Greenback to turn lower.

Given the choice, any rational investor would look to the investment with the highest returns relative to risk. In the currency world this means seeking currencies with the highest short-term interest rates with relative safety. If traders perceive low danger of losses, they will plow into the highest yield—currently the Australian Dollar—and go against the lowest: the US Dollar. The S&P 500 Volatility Index currently trades near its lowest levels since 2008. Cross-market correlations suggest the US Dollar should continue trading lower on broader complacency. Yet high yields have often acted as a double-edged sword; sudden turns in sentiment could send the AUDUSD sharply lower.

Any especially significant surprises in US Nonfarm Payrolls figures could dictate moves. Expectations are riding high into the closely-followed labor figure; an important downtrend in domestic unemployment and modest jobs growth has boosted forecasts for US economic performance. Yet expectation can often beget disappointments, and any significantly below-consensus numbers could alter broader market sentiment.

We had previously called for significant US Dollar losses on an important Euro/US Dollar sentiment and positioning extreme. Yet recent CFTC Commitment of Traders data shows that large speculators and commercial traders have scaled back on one-sided bets and hedges. The big pullback in US Dollar-long positions and Euro-shorts may have run its course, and indeed we see early evidence of a significant EURUSD top.

At DailyFX we always defer to market price action. Despite the best logic or justification to the contrary, financial markets will remain irrational far longer than most traders can remain solvent. The US S&P and broader ‘risk’ has continued higher despite significant danger of global economic slowdown and ongoing crises in the Euro Zone. Yet markets will eventually catch up, and we will watch closely for any clear signs of a turnaround. The past week could be the start of a broader reversal for financial markets and the USDOLLAR itself. – DR