US Dollar At Severe Risk of Euro- and Sentiment-Borne Volatility 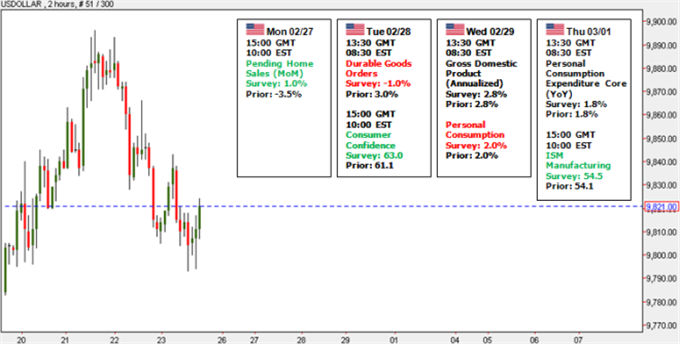 The Dow Jones FXCM Dollar Index managed to eke out its third consecutive weekly gain through this past Friday. Technically, this is the benchmark currency’s most consistent bull trend since the week ending November 26th, 2010. However, few would argue that this an exceptional run for the greenback nor that it looks like a self-sustaining trend. What’s absent? Conviction. For this index, there is a clear lack of momentum to the move. And, if we look across the majors, it’s obvious that its performance is uneven to the point of being at high risk of a substantial drop. We’ll take a look at the fundamental and sentiment-based factors that will determine the activity level and direction of the dollar for the coming week.

For the world’s most liquid currency, there are two primary fundamental themes that control both throttle and bearing: general risk appetite trends and the perception of the Euro-region’s financial health. While sentiment trends (which determine the general flow of capital in the system) are arguably the more influential catalyst, this particular drive is still lacking for conviction. In contrast, Europe is dominating the headlines and has consequently put the dollar on its back foot by reversing the polarity on EURUSD.

It is a fair assessment to say that the Euro’s trouble with Greece is hardly behind us, but the current outlook for the region’s greatest threat is one of relief. After Greece agreed to adopt additional stimulus requirements and EU ministers signed off on the second bailout program (in principle), the danger of an immediate crisis has been eased. In that relief, there is room for speculators to unwind short exposure and early adopters to position for further appreciation as additional steps are taken to bring the region back from the brink. That said, there is still a high risk that the rebound in confidence stalls in collapse. This weekend, the IMF is expected to reassert its €30 billion contribution to the Greece rescue. Furthermore, the private sector debt swap is ahead of us (requiring a 75 percent voluntary participation) and we shouldn’t discount the possibility that painful growth forecasts will lead officials to scuttle the effort.

And, while we keep an eye on Greek headlines, dollar traders will have to monitor another Euro-centric event: the ECB’s second LTRO (long-term refinancing operation). This is a direct stimulus effort – akin to the Fed’s QE programs and BoE’s bond purchase program. As we have seen many times before, stimulus injections can offer a temporary but powerful boost to risk appetite trends. It may very well be the case that this past week’s rally for European currencies (euro, pound, franc) was heavily influenced by the relief expected to follow the February 29th shot of capital. That said, it is interesting to note that general risk trends (which I like to measure in equity indexes like the S&P 500 and carry trade interest) far underperformed the Euro’s run. This could suggest that rallies for EURUSD, GBPUSD and CHFUSD (the inverse of USDCHF) are overdone. Or perhaps, traders outside of the regional currencies await confirmation.

If it came down to a direct conflict, risk trends would handily overpower euro-based fundamental drive for influence over the greenback. However, it could very well be the case that the Greek and LTRO events determine general risk trends. Yet, heading into the new week, the performance of the two macro themes is still clearly diverging. All it takes is a bout of modest panic to shake these low-volume markets.

As for scheduled event risk on the US-docket, we will have to limit our expectations as to what can be achieved for dollar impact and consistency of influence. Indicators like the consumer confidence survey, durable goods orders numbers and ISM factory activity report offer subtle adjustments to longer-term trends. For policy bearings, we have the Fed Beige Book and Bernanke talking policy. – JK