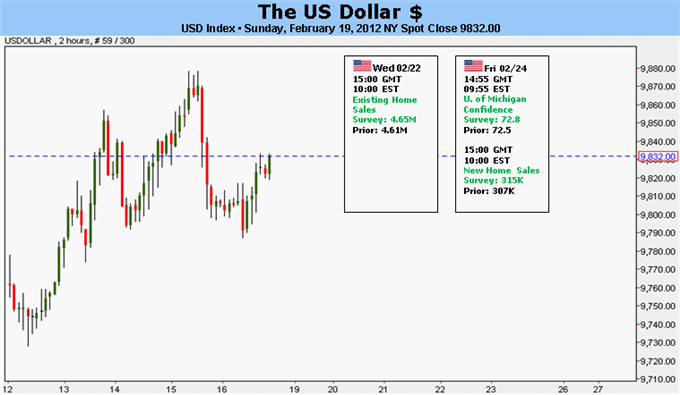 Risk sentiment trends remain the core driver of the US Dollar, putting the spotlight on Monday’s Eurozone finance ministers’ meeting to set the tone for the remainder of the week. Traders are looking for the sit-down to produce a final agreement on the second Greek bailout, releasing €130 billion in EU/IMF funding to stave off a default as a large tranche of maturing debt comes due on March 20.

The accord must deliver on two elements: Athens has to iron out the terms of a bond swap with its private-sector creditors – a scheme meant to ease its debt burden by dismissing as much as 70 percent of what is owed and exchanging the rest for longer-dated paper – as well as put to rest EU officials’ concerns about implementation of new austerity measures.

The steady stream of headlines on the would-be details of the Greek deal over recent weeks have produced knee-jerk volatility across financial markets as traders sized up the likelihood that a deal will indeed get done and its merits. However, the long history of flawed fixes to the debt crisis unveiled over the past three years tells us that the very existence of an accord is likely to prove initially supportive for risk appetite. This spells trouble for the safe-haven US Dollar at least at the onset.

This is unlikely to prove lasting. In the grand scheme of things, the Greek bailout fiasco has served as a distraction, clouding investors’ assessment of the overall global economic landscape. Indeed, as we discussed earlier, even a disorderly default in Greece should not be an earth-shatteringly negative scenario considering EU banks borrowed enough capital through the ECB’s 3-year LTRO in December to assure a credit squeeze would probably not materialize. Depending on the specifics of the deal, traders may come to see the arrangement as sentiment-negative in terms of setting a precedent for other troubled countries like Italy and Spain. Still, even if EU officials craft a generally good bargain, initial optimism is likely to prove fleeting.

With the credit crunch time-bomb defused for the time being, the focus will turn to the global economic growth outlook, where the picture is far from pretty. Economists’ forecasts suggest the Euro zone – collectively the world’s largest economy – will sink into recession this year, severely denting global performance expectations as a whole. Indeed, economists’ median world GDP expectations for 2012 have been sinking precipitously since early August. Traders are likely to pull back on risk-linked exposure upon being reminded of this stark reality, punishing sentiment-sensitive currencies and driving the safe-haven US Dollar broadly higher.