US Dollar Surges into Close – Start of a New Uptrend? 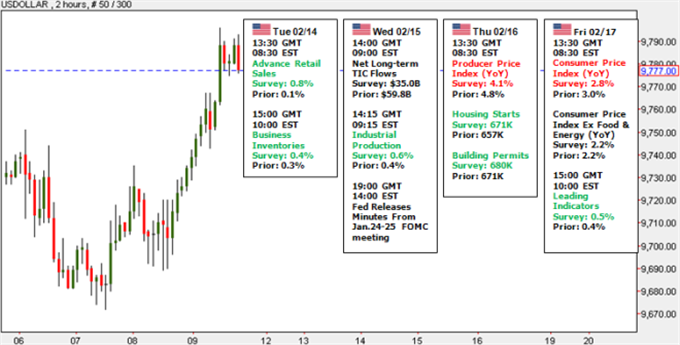 What a week for the US Dollar. The US currency started the week noticeably lower and hit fresh multi-month lows against the Euro, but a sharp turn in sentiment left the Dow Jones FXCM Dollar Index (ticker: USDOLLAR) noticeably higher. The US S&P 500 looked like a sure bet to close higher for the sixth-consecutive trading week. Yet traders sent risky assets noticeably lower on Friday and potentially set the stage for a bigger US Dollar reversal.

Talking heads blamed news headlines out of Greece for Friday’s sudden reversal; this author would argue that Friday’s choppy session underlined that market sentiment remains fragile. Traders watched in awe as the S&P seemed unstoppable on its march towards multi-year highs. Yet the rallies have occurred on especially low trading volume and a growing sense of complacency. The S&P 500 Volatility Index (VIX) recently traded near its lowest since the onset of the Financial crisis in 2008, but a noteworthy jump on Friday warns of the potential for sharper moves in the days ahead.

What does this all mean for the US Dollar? The US currency has long been used as a safe-haven during times of strong market volatility. The short-term correlation between the US S&P 500 and Dow Jones FXCM Dollar Index recently traded to record strength, and we expect the link will remain strong. In other words—the US Dollar could surge if the S&P tumbles.

Our currency-based DailyFX Volatility Indices did not quite match Friday’s noteworthy jump in the stock market-based VIX. Yet we’ll look to the coming week with great interest as the USD trades near significant technical levels against the Euro and other major counterparts.

Major foreseeable market-moving events will be limited in number but potentially pivotal in terms of market influence. The US Federal Open Market Committee will likely steal the spotlight when Fed officials release the minutes from their January policy meeting on Tuesday. Fed Chairman Ben Bernanke said that the minutes would contain “qualitative statements” on the size of the Fed’s balance sheet—i.e. Quantitative Easing (QE). Explicit FOMC interest rate forecasts all but guarantee that the Fed is unlikely to move rates until 2014 at the earliest, but further QE remains entirely possible. Any strong indication that the Fed foresees increased QE could easily spark a US Dollar sell-off and a simultaneous rally in the S&P 500.

Otherwise traders should keep an eye on US Advance Retail Sales data due Monday and Consumer Price Index (CPI) inflation data on Friday. US stocks and broader markets have benefited from a strong run of domestic economic data. According to Goldman Sachs Global ECS Research, their cumulative MAP index—which quantifies economic data surprises—hit a low in mid-August and has been improving ever since. A higher cumulative MAP tells us that US economic data has been stronger than market forecasts. Such a trend leaves hope riding high ahead of retail sales figures and similar data releases. Yet expectations beget disappointments, and the six-month winning streak further warns of risks to the high-flying S&P 500.

It is shaping up to be a make-or-break week for the US Dollar. This author fully expected the Greenback to hit further lows against the Australian Dollar and other counterparts into Friday’s. Yet the sudden reversal leaves risks that the USDOLLAR could turn higher. – DR