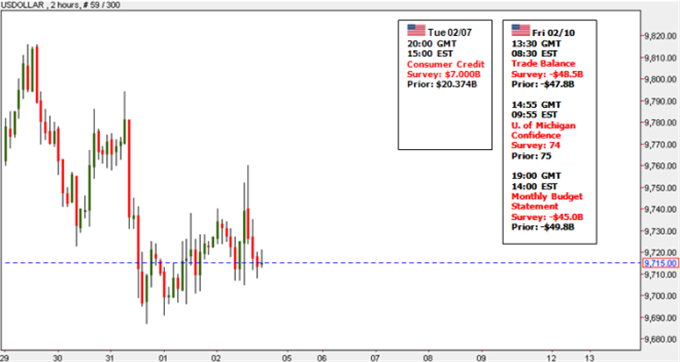 There is little debating the greenback’s immediate trend. In approximately three weeks the Dow Jones FXCM Dollar Index has dropped nearly 360 points or 3.6 percent – a significant change in bearing from the start of the year when the benchmark was threatening to move on 12-month highs. Technically, the fundamental justification for a retreat is there. We have seen the Dow Jones Industrial Average lead a powerful swell in risk trends that won the index itself a close at four year highs. And, if risk trends are surging ahead; there is little to prevent the safe haven, low-yield dollar from faltering. However, what if we aren’t confident in this climb in optimism…

In reality, there are thousands of different elements that go into the fair value of a currency (such as housing sector health, availability of capital, consumption of raw materials, proclivity for stimulus or the outlook for interest rates amongst many more). Yet, luckily for us, there are generally only a few key drivers that have an overwhelming influence over the performance of a currency. The difficulty is in identifying those catalysts and assessing their influence. For the dollar, the fundamental cocktail contains: risk trends, the effort to diversify away from the euro and speculation of QE3.

If you run a rolling 20-day correlation between the benchmark US Dollar Index and the S&P 500, you’d see that the premiere safe haven and standard for blind risk appetite have a -0.87 connection. That is an exceptionally strong link that indicates they have moved in opposing directions and at the same level of intensity much of the time. Therefore, the S&P 500’s surge to a six-month high and the Dow’s close at a four-year summit spells out the situation pretty clearly. On the other hand, the fundamental drive itself (risk appetite) isn’t assured. Equities and prominent carry pairs have trended higher since the end of December. For the most recent, highly-publicized push, we were given an additional boost by the release of the January employment figures.

We should cast a critical eye on the durability of investor optimism and start with Friday’s employment figures. The readings of a 243,000 net increase in payrolls and three-year low in the jobless rate (at 8.3 percent) are met with many skeptics about the adjustments the BLS makes to this data (particularly how they account for those disgruntled Americans leaving the labor force). Yet, we don’t need to delve into a debate on this. What matters for price action is what the market considers market worthy (sensible or not). Even if we considered the labor statistics definitive, the January reading does little to deviate from the engrained trend (meaning this was largely priced in) and such a pace doesn’t do much to return the US to a state of ‘full employment’ through the foreseeable future. Furthermore, a steady – if lackluster – trend in labor health will curb the pressure for the much-sought-after QE3 that many have come to rely on.

Beyond the payrolls impact, we have questioned conviction in leveraging riskier positions for some time. Strong trends are defined by meaningful participation that solidifies levels already reached and keeps markets moving forward. That said, volume figures have never quiet metabolized in this move. It’s not difficult to understand why as fears of a global slowdown, fading yields and signs of financial strain in different areas of the world cast a dark cloud over the market. While it isn’t prudent to fight a prevailing trend, we should be aware than a low-volume advance can succumb to aggressive corrections should skeptics return in full force.

Another factor to consider at the start of the upcoming trading weak is what happens to the euro. Renewed fears that the Greek deal could fall through prevented the shared currency from taking higher Friday. This is an additional boon from the liquid dollar.– JK