US Dollar a Natural Short but also a Fundamentally Loaded Currency 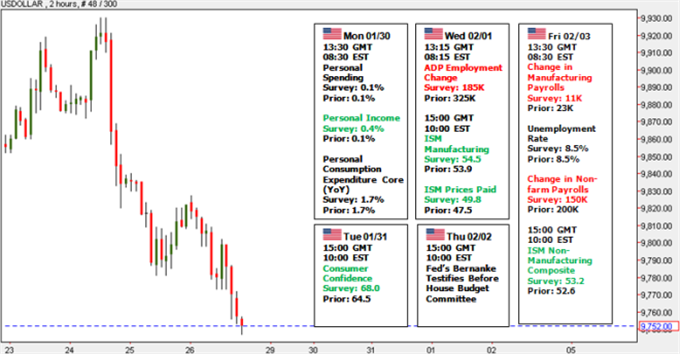 The dollar has been hammered over the past two weeks. A lot of attention is paid to the 10-day rally from GBPUSD, the EURUSD’s near five percent rally over the past two weeks or AUDUSD returning to three-month highs. There are a lot of fundamental arguments to be made for their individual performance, but the simplest explanation is generally the correct. And, across these pairs, the common denominator is a weak greenback. To form an assessment of the dollar itself, we can look to the Dow Jones FXCM Dollar Index which failed to make the move to fresh 12-month highs and instead tumbled over these past two weeks to lows not seen since November 14th. What is driving this plunge? The answer to that question will help us to answer where we go (and how quickly) from here.

If we were to assess the situation by analyzing the most potent fundamental driver first – underlying risk appetite – we would label this nascent bear trend a dominant trend, but we would also have to be highly skeptical of follow through. As the market’s liquidity provider, the dollar represents a ‘last resort’ harbor for capital when there are serious concerns about the stability of the broader financial markets. That requires rather extreme conditions to keep the dollar bid. Currently, the S&P 500 (my favored benchmark for basic sentiment) is nearly six-weeks into a bull run. That said, volume behind this move (a measure of conviction) has trended towards its lowest levels since 1999 (using a three-month average). Set that against the building evidence of an impending global slowdown (if not recession), a deepening European crisis and protectionist agendas across the largest financial centers; and threat of a downdraft in risk is high.

However, the experienced fundamental trader knows that what ‘should’ happen and what does happen frequently deviate for markets that run on speculation. We have absorbed clear signs of trouble (Euro Zone downgrades, poor 4Q earnings and weakened global GDP figures) with no change in bearing from the riskiest assets or the most stoic. To make the most effective dollar collapse or rally, a clear and strong bearing on market-wide sentiment is needed. Yet, it would be difficult to truly encourage a lasting sense of confidence given the fundamental headwinds that a building. A move towards greater stimulus would provide temporary fuel, but the half-life of such programs has grown shorter and shorter with each new effort. That said, there seems to be a growing expectation for the Fed to bestow a QE3 on the world sometime in the early second quarter; but such efforts are usually made when markets are under significant pressure.

On the opposite side of coin, there is plenty of reason to deleverage but just not the will. Since specific catalysts seem to be falling short of triggering a change in tone, we wait for the speculative drift to run out of steam and mass risk aversion to kick in once again. That means, we should lower our expectations that specific indicators over the coming week (like Friday’s NFPs) will mark a definitive turning point.

Another clear dollar driver that has separated itself further and further from traditional risk trends to keep an eye on is the health of the euro. As the greenback’s most liquid counterpart and the most prominent threat to global capital flow, this particular foil can offer immediate buoyancy or exact weight to the greenback. That is just as unstable a catalyst as risk trends themselves. The shared-currency’s rally has contradicted a growing wealth of bearish evidence. All told, we should not grow too comfortable with the dollar bear trend. – JK