US Dollar at Potential Crossroads as Euro Turns Around, FOMC Key 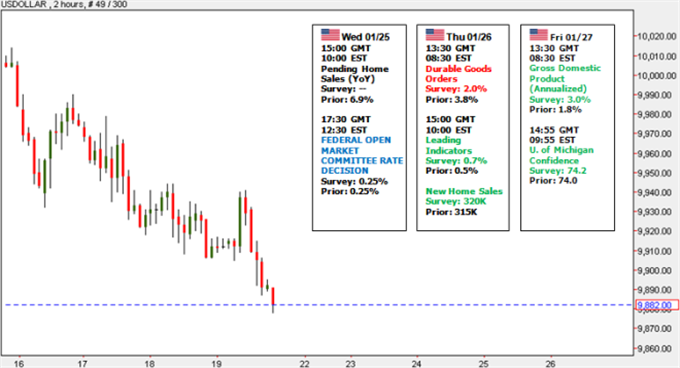 The US Dollar (ticker: USDOLLAR) tumbled fell sharply for five consecutive trading days, taking a hit as traders likely unloaded much of their speculative USD-long positions. The Euro finally showed sustained signs of life against the Greenback and we believe it may have set an important short-term bottom. But it will be critical to watch key events out of the US and its effects on the otherwise resurgent US Dollar.

The Euro/US Dollar currently stands at somewhat of a crossroads, and it will be important to watch financial markets in the coming days to gauge whether a breakout or breakdown is more likely. Traders initially sent the US Dollar higher against the Euro to start the year’s trading, but the most recent reversal leaves the exchange rate almost exactly flat year-to-date.

All eyes turn to the US Federal Reserve’s policy-setting decision on Wednesday and end-of week US Gross Domestic Product growth data. The Fed is very unlikely to change interest rates or monetary policy, but it will unveil a fairly significant new tool in its arsenal: interest rate forecasts. Federal Open Market Committee voting members will show when they interest rates will be raised through 2016—giving a much more specific view on when markets can actually predict its next moves. It’s difficult to predict what the reports will show and much less predict how markets will react. Yet we feel it may have fairly significant effect on the US Dollar, US S&P 500 and other key asset classes.

Markets will otherwise look at end-of-week US GDP growth figures with great interest. Surprisingly robust domestic unemployment figures have boosted expectations for economic expansion, and analysts predict the economy grew at its fastest pace since Q2, 2010. We get the sense that such lofty predictions leaves a lot of room for disappointment, however; expect markets to sell off on any big misses. The USD could see sympathetic declines (or advances) if the print affects outlook for broader growth in any significant way.

US Dollar traders should otherwise keep a close eye on global financial market risk appetite. The US Dollar has enjoyed fairly significant rallies on any sudden sell-offs in the S&P 500 and similar ‘risk’ barometers. The S&P seems happy to rally to fresh multi-month peaks with very few pullbacks. Yet such remarkably consistent strength leaves clear risk that markets have grown altogether too complacent.

Recent CFTC Commitment of Traders report data showed that net speculative futures positions on the Euro/US Dollar hit their most bearish on record. In other words, trend-following speculators were their most long USD in history. We had been calling for a noteworthy EURUSD short-covering rally for some time now, and indeed it seems that’s what we’re seeing traders unload some of those positions. Yet the longer-term trend favors further losses, and it will be important to watch whether the sudden rally has the staying power to continue through next week.

Currencies tend to set their highs and lows for the month in the first trading week. That leaves significant EURUSD resistance at the $1.3070 mark—a potential make-or-break for US Dollar strength. – DR