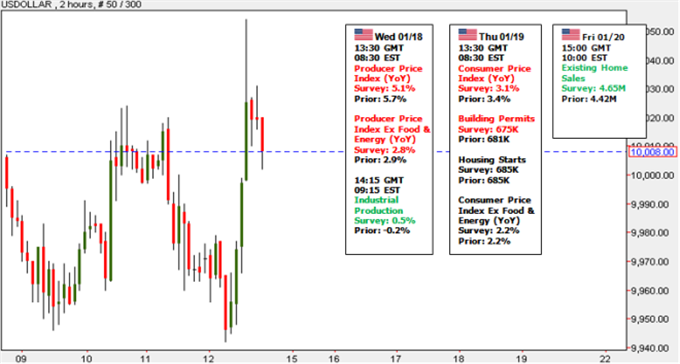 When you boil it down, the US dollar’s current role in the global financial market is the safe haven and liquidity provider of last resort. To drive the greenback higher, a slide in risk appetite and deterioration in normal market function would represent the ideal fundamental conditions. That being the case, we may finally see a passive appeal for the benchmark turn into a genuine trend moving in the week ahead if the Euro Zone’s fresh sovereign debt troubles infect underlying risk appetite trends.

So far this year, we have yet to see a meaningful rebound in trading activity – bullish or bearish. Between the fading outlook for economic activity, yields and financial health and the hope that policy officials will foot the bill with stimulus; the masses seem to have kept to the sidelines rather than instigate a wholesale deleverage or add to bailout-dependent positions. However, it is only a matter of time before this particularly immense fundamental clash takes a definitive bearing. And, considering the woeful lack of consistent yield to be found in the market along with the steady economic and financial troubles rolling in; fear is by far the more pressing emotion.

What we lack to start the dollar and capital markets moving is a catalyst with enough influence to convince the masses to abandon their comfortable stasis. Friday’s fireworks may provide the necessary spark to pull speculative interests down to fundamental reality. Standard & Poor’s (the rating agency that cut the United States’ top AAA rating last year) delivered a series of critical downgrades to the Euro Zone after the market close on Friday. The highest profile cuts came from France and Austria which lost their AAA-status and were left with a negative outlook (which suggests there is a 50 percent chance of further downgrade over the coming two years). However, arguably more systemic were cuts to Italy, Spain and Portugal. Portugal debt is now ‘junk’ status and Spain’s cut further exposes the lack of transparency in the region’s exposure. Yet, as Standard & Poor’s and Fitch have both stated, Italy is the most highly exposed to further market deterioration and presents the greatest threat to intensifying the world’s worst financial crisis.

As the primary counterpart to the euro and the world’s most liquid currency, the dollar would benefit significantly from a mass exodus of capital away from the euro. However, to truly feed the greenback’s bullish ambitions a graduation from Euro-based fear to global crisis is needed. That is more difficult to accomplish. Despite the dour outlook, we have seen equities, commodities and high yield currencies drift higher over the past six weeks.

Some may think the lack of an immediate reaction to the news through the end of Friday’s session was a sign that the event was priced in; but the capital markets were closed by the time the news crossed the wires (FX market’s closed shortly after) and we were heading into an extended weekend for the US. We have not seen the full effect of this event.

We know that there will be a building pressure, but we must also consider the fundamental dam that has held panic in check: the implicit belief of boundless stimulus. Here too, the S&P voiced an opinion: that the last EU Summit did nothing to help recent financial stains. If the EU can’t shore up its own issues, the Fed would likely react after global fear took over as the group has recently offered an optimistic assessment of economic activity. – JK