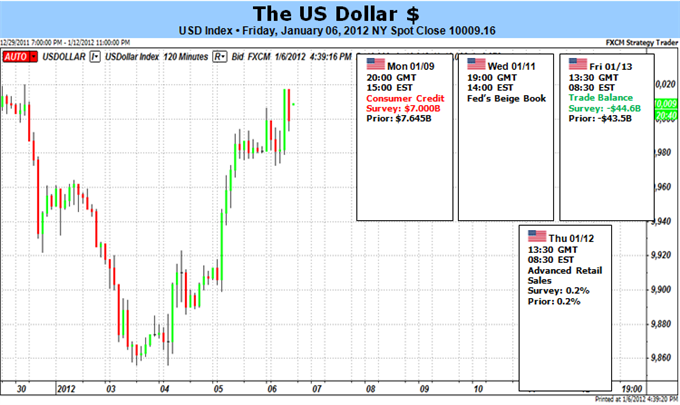 US Dollar Surges on Nonfarm Payrolls, Europe – Can it Rally Further?

US Dollar Surges on Nonfarm Payrolls, Europe – Can it Rally Further?

The US Dollar (ticker: USDOLLAR) surged against the Euro and other major counterparts, fueled by deterioration in Euro Zone tensions and unexpectedly strong US economic data. The domestic labor market unexpectedly added 200k jobs through the month of December, sending the unemployment rate to fresh multi-year lows and inspiring confidence in US growth. Momentum favors further Greenback strength, but extremely one-sided trader sentiment warns that any Euro/US Dollar corrections could be fierce in another week full of key event risk.

A relatively empty US economic calendar means that traders will focus on developments out of Europe, but traders should not ignore any fresh rhetoric from US Federal Reserve officials or late-week Advance Retail Sales data. The safe-haven US Dollar traded sharply higher on Friday despite a simultaneous rally in the negatively correlated S&P 500 and improvements in financial market risk sentiment. Why exactly?

We believe the US Dollar benefited from an important improvement in US Federal Reserve monetary policy expectations. The better-than-expected payrolls growth eases pressure on the Fed to enact further monetary policy accommodation. Such developments suggest the US Dollar could benefit from further improvements in labor market data and special focus remains on upcoming Fed rhetoric. The minutes from December’s Federal Open Market Committee (FOMC) meeting disappointed dollar bulls as the Fed struck a relatively dovish note on policy. Yet it will be important to watch how members react to December’s NFP data and its implications for employment trends.

US Dollar focus otherwise remains squarely on the Euro Zone and its many fiscal crises. It can’t be a coincidence that the EURUSD traded to fresh lows as the spread between Italian and German 10-year bond yields traded near fresh Euro era highs. CFTC Commitment of Traders data shows that speculators are their most net-short Euro against the US Dollar in history. Commercial traders are their most net-long, and it’s clear that positioning is dangerously one-sided. Yet what could happen to force an important EURUSD reversal?

It’s obvious that initial euphoria over previous European summits and fresh bailout plans was very short-lived, and traders need more than rhetoric to lift the Euro higher. At the heart of the issue is the lack of sustainability in sovereign debt loads. Very few are willing to buy Italian and Spanish bonds—especially as both countries have significant bond redemptions and funding needs in the first 3 months of the year. The uncertainty is driving the Euro sharply lower at the expense of the safe-haven US currency. As long as such flows continue, expect the EURUSD to hit fresh depths.

There are few important technical levels in the way of further Euro weakness, and indeed the next reaction low suggests the EURUSD could hit $1.2590 until a bounce. Of course, such incredibly one-sided sentiment warns that any short-covering rallies could be quite fierce. It will be critical to watch how the US Dollar trades into Sunday and through Monday’s close. Typically the first day of the trading week sets the pace for subsequent days, and high reversal risk puts special focus on early trading. – DR