US Dollar Volatility Could be Extreme, Direction Elusive on EU Crisis 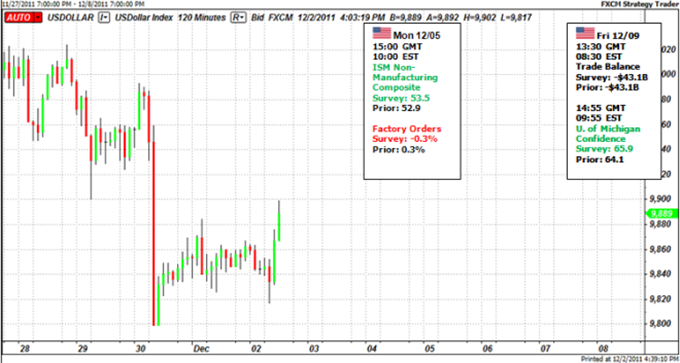 A ‘Neutral’ forecast for the US dollar over the coming week should not be taken to mean that the currency will be unmoved. In fact, my assumption is exactly the opposite. Given the fundamental waves we can see coming, it is very likely that the greenback will suffer from tremendous swells in risk appetite trends and the subsequent impact on capital market positioning. The Neutral call comes from the reality that the market will be exceptionally prone to volatility; but a clear and consistent trend to this activity is difficult to obtain. The question is not what will happen (ongoing fluctuations in the global financial markets, a series of central bank decisions that should reflect on swap lines and a EU Summit that has fed hope of a conclusive bailout) but rather how the speculative masses will respond.

Sentiment is always tough to gauge; but it is exponentially more difficult to trade when there isn’t a momentous enough drive towards yield or safety to carry the entire market. The best gauge of this lack of consistency is prominence of correlations across different asset classes – when S&P 500, AUDUSD and bond yields are all moving in concert; it is generally a sign that risk trends are in control. Naturally, when sentiment itself is stuck in neutral; these correlations will break down and the extreme safe haven dollar will naturally drift lower (liquidity is one of the only meaningful fundamental reasons to bid the dollar at the moment). Yet, the most complicated fundamental backdrop to deal with is when there is ample event risk to stir risk trends; and a common conviction in capital flow is still absent. That is the situation we are currently dealing with.

From a ‘big picture’ perspective, we note that US and global economic growth is decelerating rapidly (the IMF notes it expects to downgrade its forecasts at its January update), global financial markets are starting to lock up under similar conditions to what was seen in 2008 and the masses are coming to terms with the reality that the unwinding of excessive leverage (for investors, consumers and governments) is a tremendous burden that lies somewhere vaguely in the future. All of this sets a bearish view over the coming three to 12 months.

In turn, the tone across the speculative markets is one of skepticism, fear and caution; but this theme has yet to clearly play out in positioning. The mitigating factor is intervention. There is a clear ‘hope’ that is held by a large segment of the market as there is a reasonable connection drawn between current conditions – and policymakers’ options – today and those of 2008. It is a dangerous gamble to assume moral hazard – where governments come to the rescue of investors for their ill-conceived investments. However, the alternative for most would be a full withdrawal to cash (idle capital means no returns, no financial market revenues and eventually a big cut in growth); and there are many speculators that are willing to place bets along the bailout lines due the favorable risk-reward.

This is the frame of mind we need to approach this highly combustible week with: a larger sense of risk held back by questionable vows of salvation. Without doubt, the greatest threat to underlying risk trends (and thereby the dollar as its principle safe haven) is the health of progress of the Euro Zone crisis. Officials have bought themselves time by promising possible big changes at the December 9th (Friday) EU summit. Buying time is something a ploy that central banks and governments have grown quite accustomed to – but so too has the market grown weary of. That will leverage the importance of the promised proposals the French and Germany leaders are expected to propose on Monday. If they are uninspiring, fear could sweep over without regard to Friday’s event risk. Otherwise, we will expect little more than short-term volatility impact from standard data (trade balance, consumer confidence) and monitor global financial conditions. – JK