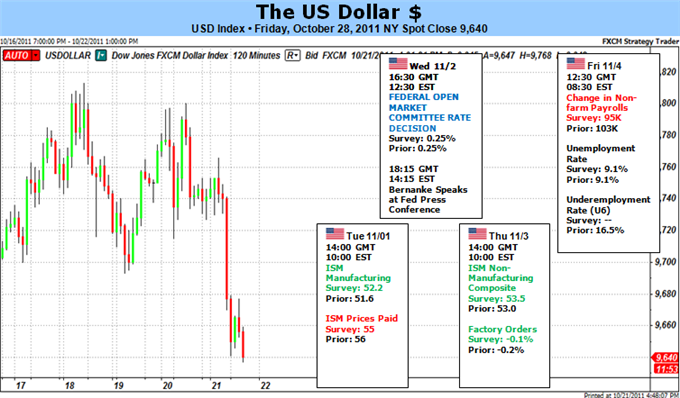 US Dollar Poised to Fall Further Ahead of Critical NFPs, ECB Decision

US Dollar Poised to Fall Further Ahead of Critical NFPs, ECB Decision

The Dow Jones FXCM Dollar Index (ticker: USDOLLAR) saw its largest single-week loss since early 2009, sold off sharply as the S&P 500 finished its biggest monthly advance in nearly 25 years. Traders aggressively shed US Dollar-long positions against the Euro and other major counterparts following the announcement of aggressive new aid for Greece and other troubled Euro Zone governments. Overall trends favor further USD declines, but it will be critical to watch major event risk in the week ahead and its effects on broader financial market sentiment.

The US Dollar continues to track movements in the Dow Jones Industrial Average with near-perfect accuracy, and we expect the Greenback to respond to any major shifts in broader market sentiment. With a US Federal Reserve interest rate decision and a US Nonfarm Payrolls report on tap, volatility is virtually guaranteed. And though it may seem counterintuitive at first, we might expect strong US data to drive stocks higher and the domestic currency could actually decline.

Consensus forecasts call for unchanged interest rates from the US Fed and a fairly lackluster gain in October US Nonfarm Payrolls data. Dour economic forecasts make it surprising to see such large advances in the US S&P 500 and general improvements in risk sentiment. Yet we believe that recent rallies in the Dow and simultaneous US Dollar tumbles are a function of short-covering. That is to say, traders are covering previous DJIA-short positions and closing US Dollar-long positions—forcing stocks higher and the safe-haven Greenback lower.

For evidence of such, we only need to look at the recent rate of change in stock markets. In “normal” bull market conditions, price will tend to trend modestly higher while downside corrections are swift and sharp. Fear is a much stronger emotion than greed; price tends to fall much more rapidly than it rallies as traders are likely to head for the exits in a panic. Yet we have most recently seen the opposite; the extreme rallies emphasize that market conditions are far from normal and traders holding short positions are liquidating in a hurry.

We look to the coming days with great interest as the first week of the month often sets the pace for the remainder of the trading period. Thus it will be critical to watch whether the S&P 500 can post further explosive gains and continue its uptrend through the month of November.

Persistent breakdowns in the Dow Jones FXCM Dollar Index suggest that traders are likely to send the USD to fresh lows against major counterparts through the week ahead. This implies that the EURUSD could yet break towards September highs of $1.4280 and perhaps even test key trendline resistance near $1.4400. Of course such moves will greatly depend on the outcome of key event risk—especially with the European Central Bank to deliver a contentious interest rate decision on Thursday.