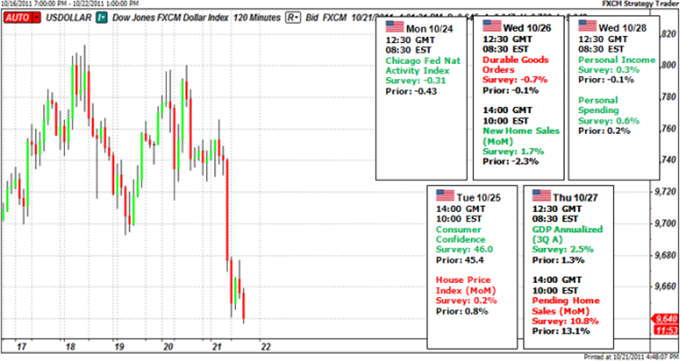 Given the extraordinary volatility the markets had generated for the dollar and risk-based assets alike through the final 24 hours of this past trading week; it may seem unusual to set the benchmark currency’s fundamental forecast to neutral. Yet, when we actually look beyond the aggressive, short-term swings in price action; we come to a very different assessment of the dollar’s backdrop. Once again, an anxious market has responded to unsubstantiated headlines and tentative technical breakouts. This swell is beneficial insomuch that it forces an imbalance in the market so that either risk trend bears have to respond convincingly or bulls could be emboldened to extend their new trend. Either way, we finally have some progress. On the other hand, the stability of these nascent trends will remain troubled.

Once again, many trades are left scratching their heads at the divergence between the reality of current fundamentals and the performance of the markets. To those following the lines of risk/reward, the trouble in Europe, the low probability of another dose of ineffective US stimulus, slowing output globally and countless other concerns does not fit a picture where high yielding and fundamentally-troubled currencies continue their advance. And yet, the push continues. Our convictions shouldn’t matter to us as much as making money if we are traders; but a divergence between price and fundamentals only lasts so long.

That said, we need to define what the hierarchy of importance the market is placing on a wide range of developments that are looming. The most immediate consideration through the open of the upcoming trading week is whether the tentative advance in risk appetite to end Friday will carry through to Monday. We see the stain of optimism in the S&P 500 futures clearing range resistance at 1,225; but other risk-sensitive assets (speculative commodities, European bonds, and high-yield currency based majors) have hesitated in following the index’s lead. Sheer momentum behind speculative positioning could carry enough weight for breakouts; but a fundamental catalyst would work better in unifying the push and generating a little better follow through.

A relatively new driver to consider first is the suggestion that the Fed will expand its large scale mortgage-backed securities (MBS) purchases. It isn’t difficult to understand from QE1 and QE2 that the result of such a policy would lead to a jump in capital market assets and drop for the greenback. Then again, the masses are far more aware about the limited impact that temporary central bank injections can offer. More importantly, interest in this scenario was driven by the comments from the Fed’s Tarullo and Rosengren. This is a minority voice; and we have severe hawks on the other side of the coin.

The more likely risk appetite driver is the European financial situation. As we have said before; this fundamental driver is far more influential as a fear generator because the full extent of the crisis is hard to visualize; but there is room for a ‘relief rally’. After the Troika’s disturbing report on the necessary steps to keep Greece stable, there is a taste of severe risk. Conversely, the EU is holding a summit over the weekend which could be loaded with a short-term fix that offers the kind of temporary rally that instigates false breakouts.

For the traditionalist, there may actually be a significant amount of interest surrounding Thursday’s 3Q GDP reading as well. Of course, the market may have already made up its mind on the course of sentiment through the foreseeable future by then. With the masses trying to get a read short-term potential versus longer-lived risks; this particular indicator will be a well-timed released. – JK